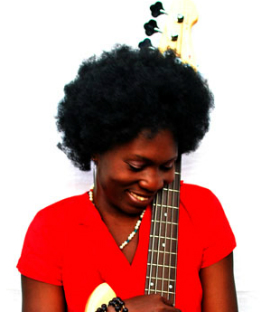 Edith WeUtonga is a jazz singer from Zimbabwe. Recently, her son, Madalitso, was diagnosed with a hole in his heart. After auctioning her guitar, WeUtonga raised just enough funds to fly to Bangalore. Under the direction of a doctor in Zimbabwe, she found herself in the helpful hands of doctors at Fortis International Hospital. Explocity ventured out to meet WeUtonga, and learn more about her life as a musician and as a mother.

WeUtonga was born in a small town in Zimbabwe's midlands province known as Kadoma. Unsure of what to do with her life then, she pursued music with the Army School of Music. Her early experiences with music were to begin. She has performed across Africa, in countries such as Uganda, South Africa, Kenya and many more.

She started off doing vocals with the Army Band at Brady Barracks. She then moved to Bulawayo's famed Township Square (also known as Amakhosi). There, she honed her musical skills, tutored and mentored in stage and screen acting. For a while she was busy touring the country with Amakhosi stage productions and performed with teams such as Athol Fugard's Hello and Goodbye, the Greek Classic Lyssistrata and Raisedon Baya's Tomorrow's People.

WeUtonga tells Explocity that her musical influences include African artists like Thomas Mapfumo and Miriam Makeba. She adds, “I also love listening to Ray Charles, Tina Turner and Ella Fitzgerald.”

Asking her if any Indian musicians are on the list, she says, “Yes, but only one AR Rahman. He writes scores for films, which is something I am getting myself into. Sadly, there isn’t any promotion of Indian music in my country. Although Bollywood films are big there now.”

In 2009, WeUtonga, while travelling with two friends, met with an accident. She sustained serious head injuries and at that time, she did not know she was a few weeks pregnant. The shock of discovering that she was nine weeks pregnant made her work more as she believed the baby's survival was somewhat a miracle.

After a couple of months of recovering at home, WeUtonga, busied herself on the live music circuit of Harare. She braved it, and faced her audience with courage.

WeUtonga had discovered a new sound within herself. She felt she had cheated death. The birth of her second son Mudiwa presented her with a new beginning in life. She began writing new music– with more meaning and depth. She called her sound WeUtonga, meaning dawn and re-branded herself and her band to Edith WeUtonga – WeUtonga of Dawn.

She tells us about her experiences in the city. Our first question, naturally, was - Why Bangalore?

She narrates, “Well, the cardiologist who attended to my son in Harare suggested Fortis Hospital. He suggested Dr Sayeed and Dr Bannerman, since he knew them. So it was under his advice that we came here to Fortis in Bangalore.”

Speaking to Dr Sayeed, he tells us, “We’ve been doing this for five years, Dr Bannerman and I. We were more than happy to help WeUtonga’s son. Interestingly, we did not know she was a musician.”

He continues, “Given her story and how hard she worked to get her son treated, we were happy to cut the treatment fees to a minimum.” Fortis International is going one step further. They have decided to give WeUtonga another bass guitar.

WeUtonga says she is here only with her son. “It is just Madalitso and I here. Madalitso means blessings, and they seem to be pouring on us. It would have cost a lot more to bring any other person. His father would have loved to come and be here for his boy. We just couldn’t afford it and didn’t have enough time to fundraise.”

We wondered if Bangalore was a cultural shock for her. She says, “Bangalore has been very nice to me. It’s a completely new place in terms of culture. I do love travel, so you can imagine how a place like India can be very different from where I come. The experience has been quite an eye opener for me.”

“My son was admitted to Fortis International. They have really been helpful. The operation was successful and he is recovering well. The doctors agreed to operate on my son for a reduced fee. So that has been a big help from them”
Recently, WeUtonga shared this sound with Bangalore. She performed at The Royal Orchid Hotel.

“I didn’t have a bass guitar when I arrived here. So when an article appeared in a leading newspaper in the city about a Zimbabwean musician at Fortis, there was an immediate interest in getting me to perform. I announced that I had not brought my guitar. Arrangements were made to get a guitar for me to perform in Bangalore.”

We asked WeUtonga about her evening of music at The Royal Orchid.
“It was lovely. The moment I strummed my first guitar line the crowd went wild. I was encouraged. I’m telling you, it was a little surreal. Mind you, I have never performed outside Africa so I was a little nervous in the beginning. I enjoyed it thoroughly and I am trying to work out a deal to come back and tour or play at festivals with my band. I really love performing here.”

We asked - As a performer, what are you taking back home from Bangalore?
She narrates, “The warmth and the love of the people. As a performer these are the things I sing about. I have experienced these things here. I also leave Bangalore having added a cap to my cultural experiences and those are things that form the core of my musical content. I am also taking home some great stories of lovely and kind people here.

WeUtonga will be in the city till October 27. “I will be leaving Bangalore on October 28, for Harare. I will perform at the Latin Food Festival on October 26. I am really excited about that. I want to have some fun there now that my son is well, and also exhibit some fine Zimbabwean music.”