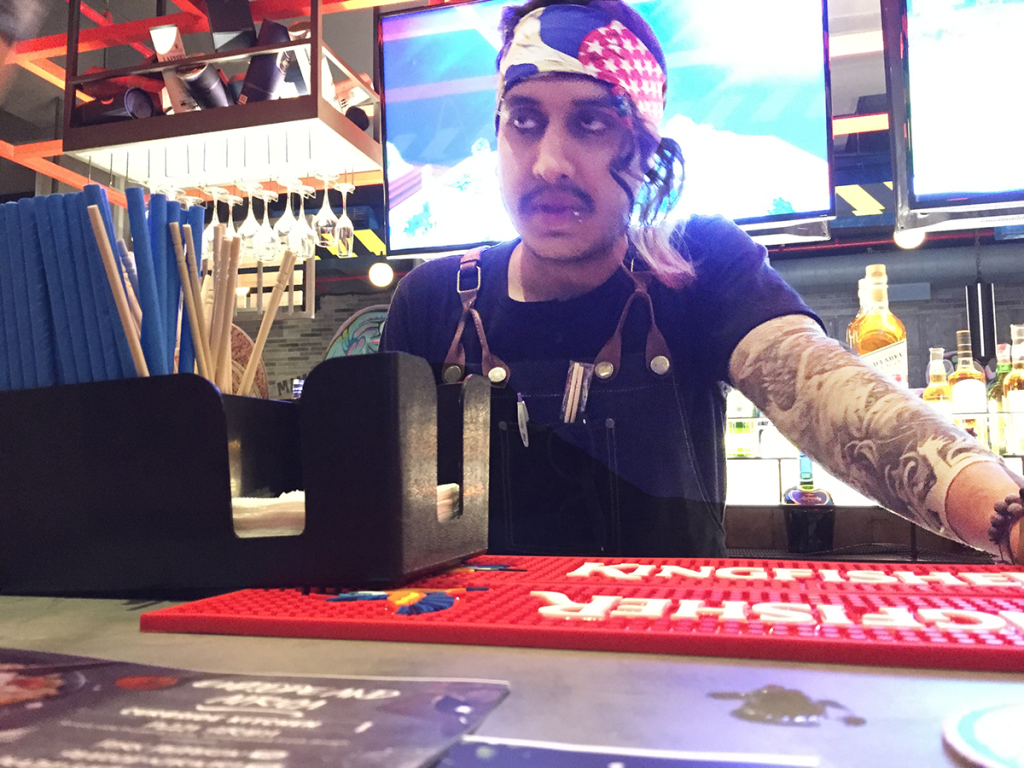 Upstairs at Garuda Mall, where there was once a washed up gaming parlour, there’s a new watering hole; it’s called Street Mama and its affectation is attitude.

This is a bar with an gritty urban vibe and art on the walls to prove it. The centre of the cavernous room is the large bar and all around the bar is the restaurant. Street Mama is spacious enough and is one of those bars that gives you elbow room without robbing you of conviviality.

The urban grit decor is compelling - from making a mascot of an alligator to wooden signs and kaajal’d bartenders invoking their inner Capt Sparrow.

The food is street food from all over the world. Considering they chose to group the world by continent, the menu is extensive. Clearly though, someone has paid much attention to making it interesting and -- much as we hate this word -- authentic. But they have ildi sliders and that’s authentic enough for us.

If there is a “correct amount” to singeing, the bacon-wrapped prawns had the correct amount of singe. It went well with the Rosy Mimosa, served in feminist pink. We ordered something else - a “mini batard” (which is not a midget conceived out of wedlock in Paris but a dish which is a sausage… ah, we get it.)  But we had to leave before they were able to serve it, understandable considering it was a busy and a sort-of-opening-night and Jack Sparrow looked like he had the Feds on his aft.

The only part of the proceedings too local-yokel and cutesy to pass for urban grit, was the “mojito cart”. Suddenly, there was the unmistakable peal of a bell like the one rung by a temple priest who is about to dedicate burning camphor to his deity. Just as we were about to abandon our atheism, a dude walked by pushing a cart and yelling, “Moheeetoe! Moheeetoe!”

White rum and mint leaves wobbled tantalisingly on his cart.

How Megna Jain Of JP Nagar Doubled Her Cupcake Business In One Year
Would you like to submit your article to us or write for us? Click here and tell us about yourself.