The Ugly Indian: A Tale Of Hope

A group of people calling themselves "The Ugly Indian" pick up mops, brooms and other weapons of mass cleanliness and select a spot in the city to "fix". They do not identify themselves individually and spoke to Explocity in anonymity. 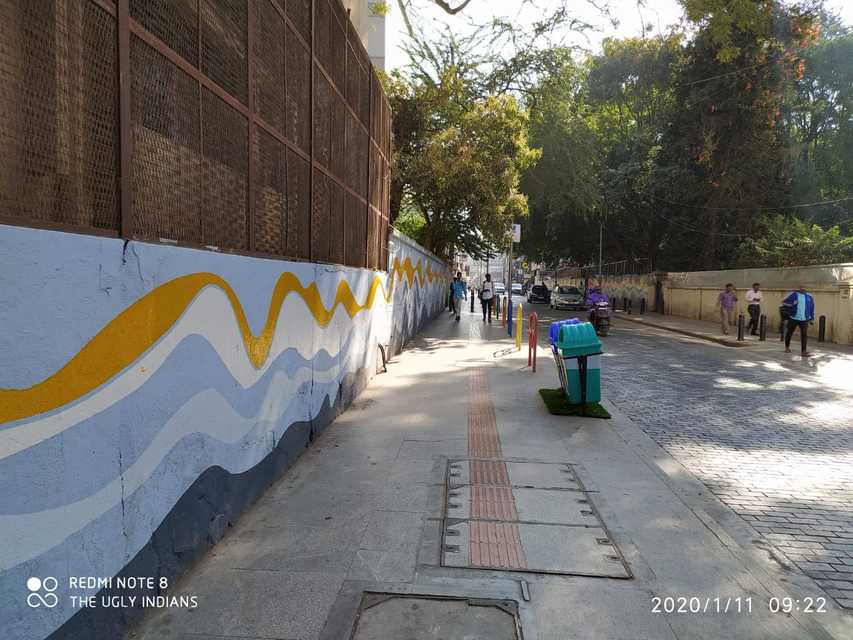 A group of people calling themselves "The Ugly Indian" pick up mops, brooms and other weapons of mass cleanliness and select a spot in the city to "fix". They do not identify themselves individually and spoke to Explocity in anonymity. With neither catch nor catechism, they simply roll up their sleeves and clean up the city. Some of their transformations are amazing.

There’s a stretch on Church Street, about 800 metres long, that is testament to the Broken Windows theory (explained later in this article).

It is also testament to a group of people who helped change the stretch from a garbage-ridden patch of urban hell to something that resembles civilization. They call themselves "The Ugly Indian" - a group whose members wish to (or maybe, need to) remain anonymous.

The group’s credo is that Indians must take responsibility for the way things are. The landing page of their website, www.TheUglyIndian.com, offers that dirty, unhygienic and cluttered environs are a cultural malaise of Indians. To quote their (eloquently written) website: “It’s time we admitted that many of

India’s problems are because many of us are Ugly Indians. Look at any Indian street, we have pathetic civic standards. We tolerate an incredible amount of filth. This is not about money, knowhow, or systems. This is about attitudes.

About a rooted cultural behaviour. The Ugly Indian can take the world's best systems and find a way around it. Even outside India. Streets in Indian-dominated suburbs overseas are good indicators of this lack of civic sense. Ask those who have visited Southall, London), Edison, New Jersey and Little India, Singapore.” (Add Karama, Dubai -Ed).

The Ugly Indian does not claim to be able to change everything, but these Bangaloreans are not standing about, whingeing about the uncaring government. They swoop down and sweep up. They do not pretend to activism, pedagogy or NGO-type “awareness drives” and “advocacy”. Their motto is, ‘Kaam Chalu Mooh Bandh (“Shut up and get to it”).

The Ugly Indian go out on weekly missions to 'spot fix' Bangalore city.

The Ugly Indian keeps the municipal authorities and the cops informed about their spot fixing activities. They receive support and encouragement not only from local authorities, but also business establishments, stores, and restaurants.

With a common sense, problem-solving approach The Ugly Indian have realised that finger pointing and blame the system isn't going to make the difference. Direct action might.

To quote their website again, “We believe that there is no magic wand, or silver bullet, to solve India's civic problems. We are realists, and accept that many of India's problems are hard to solve even if the government and public work closely together and money was freely available. Of our many civic problems, we view the problem of visible filth on our streets as a behaviour-and-attitude problem that can be solved in our lifetime (or maybe, this month). This can be achieved without spending money or changing legislation or systems. It requires coming up with smart ideas to change people's rooted cultural behaviour and attitudes. And making sure those ideas work.”

The absence of pedagogy is refreshing. There are no preachy, ideological debates on their site and it appears they understand to supplement and support a system, however broken, will stand a greater chance at something actually getting done.

The Ugly Indian says there’s more to itself than a wish list. The members set benchmarks for their activities. For example, they will deem a project to, say, clean up a street, successful only if the street stays clean for at least 90 days without further involvement from The Ugly Indian. (Read case study.)

Solutions must be low- or no cost, ideas must be easy to implement and what they do should change the behaviour and attitude of all concerned, with minimal disruption of the daily habits and patterns of citizens.

An enthusiastic Ugly Indian said, "A spot-fix with The Ugly Indian is one of the most positive things you can ever do. It brings in a sense of ownership for your city. A country this size cannot progress without active citizen participation. It is heartening to see parents come with their small kids, for these cleanups, a great way to teach them social responsibility, a lesson they are not likely to forget."

People who witness The Ugly Indian at work say the sight is heartening. It earns respect from establishments whose localities have been spot fixed. Queen’s Restaurant on Church Street applauded its efforts. “The garbage cleaning organized by this group is commendable and we appreciate the effort put in.”

The coffee shop Matteo on Church Street was inspired, “It’s impossible to be self-motivated in doing something that does not generate any income to survive in this cruel world. But humanity exists in doing social service.”

Another member said, “I never knew cleaning a whole lot of yuck could actually be so satisfying. The all-inclusive approach of educating street workers, garbage collectors, mingling different sections of society and inculcating respect for the space are the cornerstones of the impact The Ugly Indian makes.”

An inspired volunteer felt, “It’s a feeling that can't be put in words. I feel a sense of ownership. The spirit is contagious. I am proud to be an Ugly Indian.“
The initiative appears to be taking flight. The group says it has been attracting an increasing membership, “across age groups and demographics”. Volunteers contribute towards supplies, apart from doing the actual spot fixing. Recently, large corporations have expressed keen interest in joining forces with The Ugly Indian.

The Ugly Indian says that the best way to join their initiative is to first join one spot fixing activity and “see for yourself”. These motivated Bangaloreans can be reached on Facebook page or by mail: theuglyindian@gmail.com.

Filth on the Footpath

Isn’t this a common sight? The footpath is broken, nearby shops dump garbage –it’s, after all, not in front of their shop. It is an unclaimed public space as nobody really owns this small stretch of footpath (it lies between two commercial complexes). Worryingly, nobody seems concerned. This dump has been there for years. It is part of the landscape. Why bother? We are like that only. But , this is next to several classy restaurants. Rat colonies flourish here. And god know what else. You would think somebody will do something about it.

As nobody else seemed concerned, we made it ‘our problem’. After much trial and error, we were able to ‘solve’ the problem. Nobody dumps garbage here anymore. Really. Suddenly, there is pride in a clean footpath. It seems rather obvious now, but nobody wanted to make it happen. The ‘system’ and the public agree this is a better way to keep the footpath. It needed an Ugly Indian to take the first step. Everyone else responded.

The cynic in you is saying : It’s just a few pots isn’t it? It still looks tacky. How long will it last? The pots will get stolen. Garbage will return. That’s what most people said. Well, it has lasted 6 months. On the Indian street. That is some achievement.

It took a lot of doing. This is about persuasion and smart design. It involves understanding why people were like that only, and not lecturing. It required building trust with the garbage collectors. With the shop-owners. With cleaning staff. With the recyclers. It was worth it. Over a 100 shops have voluntarily changed their daily garbage dumping behaviour.

What’s the big deal? What difference does this make? Well, quite a lot actually. Filth on footpaths is not random. It is part of a predictable daily cycle. This ‘spot’ is on a 1km long street, and there are 4 other such ‘spots’ on the same street. Applying a band-aid on this little wound has cured about 200 feet of bleeding footpath.

The impact is dramatic to those who live and work there. Absence of litter is noticed only by those who are used to seeing a place filthy. We have now applied band-aids to nearby wounds, and now 500 metres of this footpath looks inviting. People actually walk on it - earlier they used to walk on the street.

The theory maintains that if a place is dirty, it will remain dirty, if it’s clean, it will remain clean. Case in point: UB City. How many people actually throw garbage in front of UB City? You already know the answer to that. And in contrast, when you see a dirty wall, how likely are you to see people make it even dirtier? No points for guessing.

This is a theory put forth by social scientists James Q. Wilson and George L. Kelling, in 1982, it suggests that behavior is influenced by behaviour. And that good behaviour can be as infectious as bad. Their conclusions were in part based on an experiment conducted by Philip Zimbardo, a Stanford psychologist back in 1969.

He had arranged for car with no license plates, with the hood up, to be parked in the Bronx in New York, a low-income, predominantly African American, rather dangerous neighbourhood. At the same time, he arranged for a similar car to be abandoned in the upscale Palo Alto neighbourhood in California.

The car in the Bronx was attacked by vandals almost immediately. He noted that a family – father, mother and young son – approached the vehicle first, ridding it of some of its parts, and other people followed suit. In a short period of 24 hours, the car had been stripped clean of any valuable parts and very soon, children began using it as a play area.

In Palo Alto, the more wealthy, predominantly white area, the car remained intact for more than a week. Zimbardo went to the vehicle himself after a week, smashed the windows with a sledgehammer and observed the result. Immediately afterwards, he noticed well-dressed, respectable people vandalizing the car.

The conclusion was that in the Bronx, where property is abandoned with more frequency, it took much less time for vandalism to occur than the fancier Palo Alto neighbourhood. That in any civilized community, when mutual respect is disregarded, and the feeling that ‘no one cares’ is created, then the community begins to believe it and acts accordingly.

With inputs from: Lekha Gondhkar