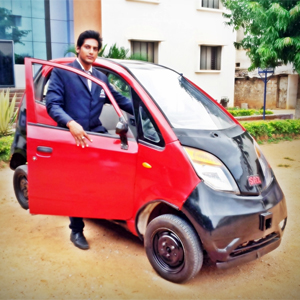 Tata Nano, the world’s cheapest car which made a big splash in 2008, and Cervo, Maruti’s small car expected to hit Indian roads this year, have some competition. Three engineering students in Bangalore have designed a small car prototype called Saz.

They spent Rs 1.4 lakh on the project with some help from friends and family. “We are confident that each Saz will cost anything between Rs 75,000 and Rs 80,000 if it is mass produced,”said Sanu.

Saz has been built with parts bought from the scrap market in Shivajinagar. The steering, dashboard, outer body and tyres are from a damaged Nano. The front seat is from a Daewoo Matiz. “The back seat is designed and stitched by us,” said Sanu. No wonder the car’s name comes from the first letters of the trio’s names.

Saz is 10 feet long and 3 feet 6 inches wide. It needs a parking space of two motorcycles. “Our car’s width is half of conventional small cars, thus saving space on the road as well,” said Arif.

“The prototype car has an innovative independent front and back tilt suspension system which allows it to be manoeuvred like a motorcycle,” added Zeeshan.

Work began on the prototype two years ago. Sanu said, “We started with a 300cc engine and finally settled on a 150cc engine. Our objective was to build a vehicle which would be a convergence of a car and a motorcycle.”