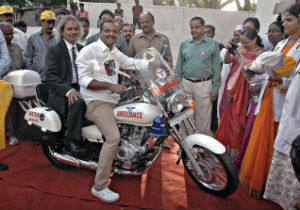 The government plans to introduce two-wheeler ambulances in Bangalore.

A model of two-wheeler ambulance was unveiled on Sunday by the Health Minister U.T. Khader when he came riding it to inaugurate the Pulse Polio immunisation drive at Ghousia Hospital here on Sunday.