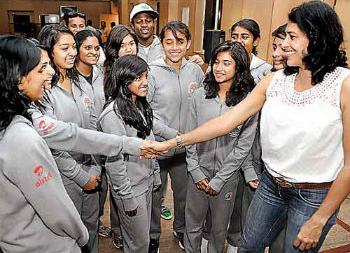 For the first time in 46 years, India will be sending an all-girls under-15 football team to Children’s Olympics, to be held in Canada. A bunch of eight girls from Bangalore will represent the country at the 47th International Children’s Games, which is endorsed by International Olympic Committee.

“We have been sending a boys team for the past four years. This is the first time we decided to send an all-girls soccer team. The exposure they will get now will go a long way in preparing them for future competition,” says Elvis Joseph, founder director, Bangalore Schools Sports Foundation.

It has not been long since the team started preparing for the competition. It has been two months since the preparations started. When asked if a two-month preparation is enough for a competition of this stature, Joseph laments the sad state of sports environment in the country.

“We could take out only two months. This itself was difficult as schools have their examinations and all. There is no formal time given to sports,” rues Joseph.

“No training is enough, but we have worked hard for this. Hopefully, we will be able to put up a good show in Canada,” says Keya Viswanathan, one of the participants.

Arjuna Awardee Reeth Abraham, pointed out how schools nowadays do not have a proper playground in place.

“The ideal situation would have been if we could start training the kids an early age. However, there is little time devoted to sports. Their schedule is usually packed with studies, hence there is no time left to play,” she says.