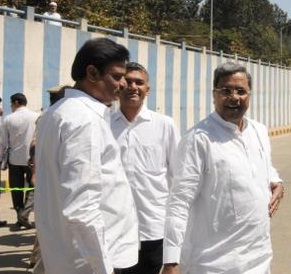 Chief Minister Siddaramaiah inaugurated an underpass at BEL Circle, followed by two flyovers - one at the Nagawara junction on the Outer Ring Road (ORR) and the other is the Bhadrappa Layout junction on the ORR.

Siddaramaiah also announced that stretches across the Outer Ring Road will be improved and several arterial roads in the city will be asphalted.