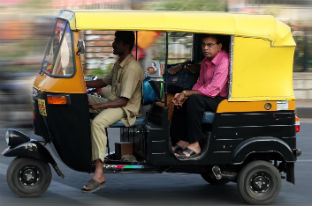 Dealing with auto-rickshaw drivers, who arbitrarily charge excess fare and manipulate meters, is an everyday hassle for commuters. There are no fixed fares and meters do not show the right reading.

"My day typically begins and ends haggling with auto drivers over the fare. Either they refuse to take you if you don't pay what they demand or tell you midway to give Rs 10 or 20 extra," complained Supritha Belur, an HR professional in Bangalore.

Mayukh Patra, who has been staying in Bangalore for two months now, has had enough bad experiences with auto-rickshaws to shun them. "The drivers think they are kings on the roads. The minute I speak in Hindi or English, they have found a scapegoat who can be fleeced at will. If I am getting late, I submit to their extortion. If I start early I let go of three-four autos, until a driver agrees to go by the meter," he said.

There are several complaint hotlines and websites in case auto drivers demand excess fare. But they have been of little help. Auto union activists say the crux of the issue is poor economic returns.

"We have been demanding that the state government finance housing facilities for auto drivers. We have also demanded welfare measures like health benefits and insurance cover among others," said M Manjunath, president of Adarsha Auto Union in Bangalore.

Auto-rickshaw unions have realised that excess fare is an issue that can destroy their business and have resorted to self-regulation. A spokesman for the Auto Rickshaw Drivers' Union, a wing of the CITU, said their affiliate drivers are given periodic training which includes an internal vigilance of finding drivers who demand excess fare and counselling them against it in the interest of the community.