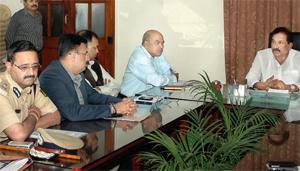 "After a bank employee was assaulted at an ATM on Tuesday, the state government has formed a committee headed by additional chief secretary of the home department to look into the matter. RBI and bank officials have held discussions to safeguard the interests of customers who visit ATMs. In the coming days, guidelines will be set on security measures that need to be followed at ATMs," the minister said.

As per the Karnataka Security Guard Rules, security guards must be between 25 and 50 years, and ex-servicemen up to 60 years can be deployed. Security personnel have to undergo training before being employed and a security guard must clock only an eight-hour shift.

However, there are instances of security agencies employing men above the permitted age group. Also, most ATMs in the city are poorly maintained with entry possible even without swiping the card at the door, faulty CCTVs, no display of emergency numbers and other problems.

The minister said there is a need to remodel the physical structure of ATMs in the city. "The present structure of ATMs is posing a risk to the lives of customers. In our country, the strong room and ATM are located inside a room, but abroad customers have access only to the machine," he said, adding here customers have to get inside a room to conduct transactions, giving anti-social elements an advantage. He said the state government had brought this issue to the notice of banks.

The minister said 32 incidents of ATM robbery and assaults on customers have been reported in the city out of which police have nabbed the accused in 28 cases.

In August this year city police had convened a meeting with bank executives to suggest measures such as installation of CCTVs and burglar-alarm systems, build compact doors that would prevent miscreants from carting away with the machines and employing security guards. The cops also suggested a cluster-based location for ATMs of different banks.