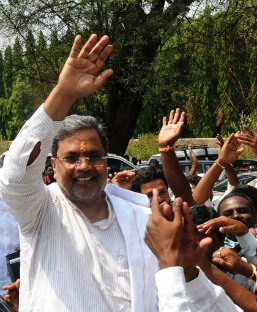 Siddaramaiah completes 100 days in office on Tuesday, but his performance hasn’t been impressive. With his focus being on Ahinda (acronym for minorities, backward classes and dalits), the the Chief Minister has so far proven to be weak, in terms of execution of programmes and public relations. Siddaramaiah started off well with the Anna Bhagya scheme. The Re 1 per kg rice to BPL families showed the government’s intent to deliver. However, the groundwork for its implementation wasn’t promising. This resulted in the scheme being postponed thrice before its launch.

According to a senior Congress leader, a few good decisions have been taken, but the performance of some ministers, especially the senior misnisters holding key portfolios, has not been up to the mark. "Many ministers are not known beyond their constituencies. Apart from HK Patil, RV Deshpande and TB Jayachandra among the seniors and juniors like Dinesh Gundurao or Krishna Byregowda, the others are yet to make an effort to reach out to the people and party workers,'' he added.

Luck seems to have been on Siddaramaiah’s side with a good monsoon. Former legislative council chairman BL Shankar said: "Good rains resolved half the government's problems. However, due to the legislature session and by polls, focused attention of the government was distracted."

-Four cabinet vacancies to be filled

-Chairpersons to boards, corporations must be appointed

-Anglo-Indian member to be nominated to assembly