Home | Bangalore In Pictures | Sivasailam: Skip A Station Rather Than Delay Metro 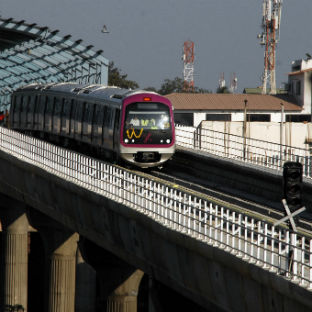 Residents of Bannerghatta Road, BTM Layout, and Jayanagar 9th Block East heaved a sigh of relief on Tuesday, when Namma Metro authorities stopped marking properties that would have to be sacrificed for two realigned tracks. Bangalore Metro Rail Corporation Limited (BMRCL) had been carrying out initial assessments for realignment of Metro Phase II lines and interlinking station. However, the proposal is now likely to be placed before chief minister Siddaramaiah, and the new government will review the decision taken by the previous regime.

“It is an issue of public good versus private good,’’ said a senior BMRCL official, adding, “the government cannot be insensitive to public pressure. The government has to decide if Jayadeva Hospital is more important than several properties put together, apart from the cost escalation and litigations.”

Sivasailam had earlier expressed his reservations about the alignment change, citing collateral damage in terms of property demolitions and cost escalation. Sivasailam was of the opinion that the best option would be to skip the station as the entire line could get stalled on account of litigation.