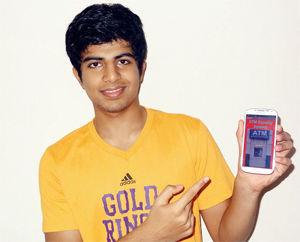 18-year-old Sudhanshu Nath Mishra, developed an app to put an end to ATM thefts. The Android application will not only alert bank authorities and the police when an ATM is being broken into, it will also pinpoint the exact location of the machine should the robbers manage to flee with it.

Mishra, who just passed out of STD XII from AECS Magnolia Maaruti Public School, thought of the idea of an app after reading about an ATM theft in the city. He visited several banks, ATM kiosks and even an ATM development centre to find out why stealing an ATM was ridiculously easy. He then coded his programme that, if implemented, can help end such crimes.

Sudhanshu found that the modus operandi of the thieves follows almost a ritualistic pattern: Disable the surveillance camera, disconnect the power and the centralised battery, uproot the machine and cart it away.

"I visited banks and was told by banking officials that most ATM thieves were intelligent and knew how the machines operated (like power source, camera etc)," Sudhanshu. said. "Most ATMs are connected to a national network managed by National Payment Corporation of India (NPCI)." While the NPCI can detect fraud, it isn't equipped to deal with a physical heist of the machine. That needs local intervention.

Sudhanshu's security solution involves two smartphones that run the android application he had developed. The app has inbuilt sensors (like accelerometer to measure vibration, temperature, a USB connection to measure power and a mike to detect noise levels).

"When the sensors detect the slightest change in any of these parameters, an SMS alert is automatically sent to the police control room. Another app then tracks the location of the ATM on a Google map and even gives GPS coordinates. These smartphones can be easily hidden in the top (electronic) and bottom (cash dispenser) compartments of the ATM. The phones communicate with a back-end monitoring system and the local authorities that receive the alert. The phone will work even if the ATM is carried away."

Sudhanshu said the phones can be installed in less than 30 minutes. "As it is independent of the ATM power and communication network, it is tamper proof. The app can also send alerts to other controlling devices like creating an audio alarm, locking doors etc during attack.