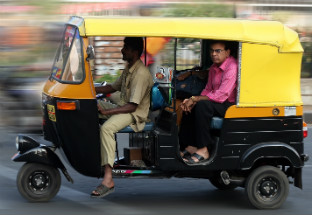 At some point, every Bangalorean would have had an experience with an auto-rickshaw driver. Experiences are often riddled with complains. But, rarely do we ever question – Why? Explocity decided to shed some light on this matter by exploring a day in the life of a rick driver in the city.

Rick drivers in Delhi are known to be extremely rude, while those on the streets of Mumbai have a better reputation of being friendly. Bangalore seems to have an unusual mix of both.

If you’re travelling around Bangalore via rickshaw, you are often hit with lines like...

“Twenty rupees extra.” Or, “Rupees 150 (for a five kilometre commute).”
The list is endless.

For this writer, there’s another problem that adds to it. It is that of a lingual hindrance. Since communicating with rick drivers gets in the way, other problems crop up.

There’s haggling over prices and many auto-rickshaw have their metres rigged. This is, for many commuters, the most irksome of issues that they face. It’s not very uncommon for an amount to shoot up to Rs 120, or more, after a six-kilometre travel.

Then, there’s getting to a destination via the shortest route, which doesn’t always happen. Being relatively new to the city, it takes a bit of an effort to know one’s way around. However, a smart phone with Google Maps does come in handy.

Here’s little tip for those who aren’t sure if a rick is trying to get more out of your pocket. Download Google Maps, have a clear understanding of the location of your destination. Keep a check on your screen with the distance sidebar indicating the distance.

To elucidate on this issue that we Bangaloreans face, Explocity decided to spend an entire day with a random rick driver get a glimpse into his life, and perhaps get some answers to our problems.

Interestingly, and not surprisingly, a number of rick drivers shot their price over the roof, till we met Ashok.

Ashok (an alias) is a 56-year-old auto-rickshaw driver. Luckily for this writer, Ashok could converse in English. He tells us of his usual day.

“I start my day at six in the morning, and usually park in by mid night. I normally get passengers rushing off to work at this time. Of course, there are also some young people who have been out partying the whole night, looking to get back to their houses in the morning.”

Ashok tells us he picked up the English language working as a caretaker.
He is supporting a family of two children and a wife.

He goes on to say, “I’ve been an auto driver for 13 years. Before this, I was a caretaker. It’s difficult for anyone to find a job these days. You can only imagine for someone without a formal education. I decided to be in this profession because I was sure it would bring in the bread every night for my family.”

After giving us a brief description of his beginnings, we decided to get down to the serious questions.

Why do rick drivers ask for extra fare, and how often do you do it?
To be honest, I do it every single day. It’s not easy being on the road. Traffic is a nuisance, and I only seek to make a little extra for my home. 10 to 20 rupees is a big amount for someone who earns a daily wage. It makes a big difference.
We all know that it isn’t fair to ask commuters for an extra fair, but at the end of the day, I am working and I am looking to make as much as I can to support my family.

Why is it that rick drivers take advantage of people who are not from the city especially those who have a communication problem?

Personally, I do not do that. I cannot speak for other rick drivers. We are huge in number. Each driver has his own way of making his own money. It is wrong for anyone to take advantage of people, especially foreigners. But, like I said, at the end of the day, it’s a job and we are all trying to make the most of it.
With the answers Ashok was giving, it seemed the same trend would continue for the rest of our “why’s and what’s?” So we decided to question him from a different angle.

How much money do you make, on an average, everyday?
It depends. To give you an average figure, I would have to say I make about Rs 800 to Rs 1100, daily. It might sound like a good daily wage, but as a rick-driver on the road, I do face a lot of problems.

Can you tell us about these problems?
It’s mostly with policemen on the road. I can tell you that all my papers are in order, but somehow, the cops on the road always find a way to get money out of our pockets. If we don’t pay, they create bigger problems for us, which usually ends up abusing us physically.

I should mention that not all policemen behave this way with us. It is only a handful, and this isn’t a problem that we face every day.

What about problems with passengers?

Again, I cannot speak for all the rick drivers in Bangalore. For me, the biggest problem is having passengers who are drunk. They tend to abuse us verbally. It affects us. We are working professionals too. We are looking to make a living too. This usually happens after 11 pm.

The law states we can ask for one and half times on the metre rate for after hours, but they insist on pushing for cheaper rates. What they don’t understand is that it is dangerous for us to be driving around mid-night. There are a lot of risks involved, and most of these risks have to do with traffic cadres.

Can you also tell us of the most interesting incident you’ve had with a passenger?
I have been doing this for more than ten years. I have had quite a few interesting incidents. One that comes to mind happened not a few weeks ago. I had agreed to drop a passenger from MG Road. It was obvious he had been drinking a bit. But he seemed sober enough to let me take him where he wanted to go. I was wrong.

He asked if I could drop him home. I asked where, to which he replied saying he stays in Rajajinagar. It’s quite a stretch to go from MG Road to Rajajinagar. After giving him a price, he agreed willingly with out a fuss.

On reaching Rajajinagar, I asked for an exact location.

He replied saying, “Where have you taken. No, I said Rajarajeshwari Nagar.”
This annoyed me. But I couldn’t just leave him there. I asked for more money. It only seems fair, to which he agreed.

I didn’t want to take a risk this time, so I asked him for an exact location around Rajarajeshwari Nagar.

He said, “I’m so sorry, I meant Shivaji Nagar,” which is very close to MG Road. I asked for a bigger fare, and he agreed. He must have realised it was his fault.
I reached Shivaji Nagar at 1 am, and the amount had summed up to six hundred rupees.

Would you say you are stuck driving an auto-rickshaw for the rest of your life?
I really cannot say. For now, I have no other option. However, it is a profession that I will never allow my children to fall into. My kids are in school and I will make sure that they have better careers, instead of driving a young drunk around the city till 1 in the morning.