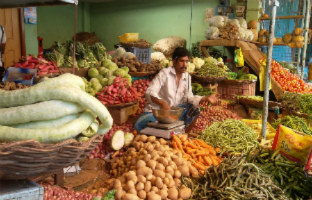 Consumers have been left with no choice but bemoan that prices of onion have peaked to Rs 70-80 per kg in recent times.

With the state witnessing heavy rainfall, it has not only damaged crops but also adversely affected the transportation, putting it totally out of gear.

According to traders, not many transporters are ready to ferry the perishable produce from farms due to inclement weather which take a heavy toll on their transport vehicles.

Poor supplies from Maharashtra, also due to heavy rains, is contributing to skyrocketing onion prices. The situation is expected to remain the same for the entire month until the new onion crop arrives in the market.