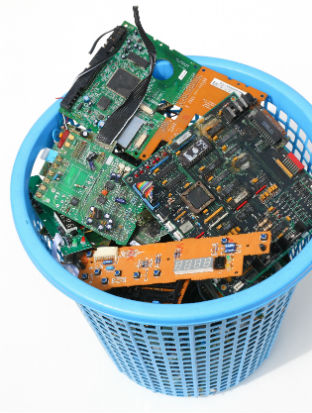 Bangalore is the IT capital of India, but soon it will also be the E-waste hub of the country. After Mumbai and New Delhi, Bangalore generates 37,000 metric tonnes of E-waste every year, making it the third largest E-waste generating city.

But more than the city's IT corridors, which generate a lion's share of the E-waste, what is worrying experts and the state government is the 30 per cent E-waste spitted out by residential localities and commercial establishments. This unaccounted for 30 per cent, in the absence of proper collection system, is ending up in landfills triggering panic.

Industry experts and scientists have mooted the idea of roping in residents' welfare associations (RWAs) and apartment associations for the collection of E-waste in their respective localities. The associations too will gain from it as they can earn revenue by selling off the collected waste to recyclers, the experts said. The idea got good response at a seminar on E-waste management, conducted by the Associated Chambers of Commerce and Industry of India (ASSOCHAM) on Wednesday.

N Sivasailam, principal secretary, forest, ecology and environment department, said, "We have a pretty decent system in place to collect and process the E-waste generated by the IT industry. But collecting the same from individual households is going to be a major task. There is the risk of E-waste components ending up in the kitchen waste bin. I hope the industry would either suggest ways or come out with measures to address this issue."

Jacob Crasta, co-chairman, Assocham (southern regional council), said that roping in RWAs and apartment associations is the best way to address the problem. "Be it the RWAs or apartment associations, on an average they have units ranging from 25 to 2,500 at various parts of the city," Crasta said. "They can collect E-waste from individual units within their premises, and can either sell or auction it to recognised recyclers at a reasonable price. With precious metals to be extracted from the E-waste, it would fetch these organisations revenue, and will also address problem of collection and processing of the waste. Of the 72 recognised E-waste recyclers in the country, 14 are based in Karnataka, and many of them are operating in Bangalore itself."