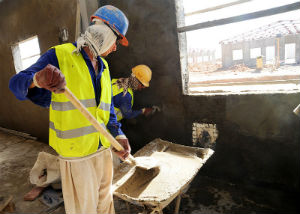 A building collapsed near Kengeri and the rescue workers had just three hours to pull out 11 labourers trapped in the wet concrete mix. The fear of the mix solidifying and killing the victims loomed large as the 53 grade cement used to lay concrete is designed to dry in under three hours.

The fire brigade was equipped for any eventuality though. Fire tenders, a rare sight at building crash sites, were deployed here. Three of them were used to fight cement and not fire.

"We constantly poured water on the mix, so that it didn't solidify," said KU Ramesh, chief fire officer.

A team of 54 fire-fighters, including officers, were assisted by site workers and the public. The entire building was combed as there were fears of more workers being trapped.

Shailesh, a local, said he could see people trapped under a mesh of steel debris. "It was difficult. We eventually had to use gas cutters to cut the metal rods and extricate them," he said.

Fire fighters said cutting through the debris was a text-book procedure. "We generally don't have the luxury of time as the trapped need medical attention. But in this case, there was also the fear of them being covered in solid concrete," said a fireman.

Three rescue vans from Rajajinagar, Jayanagar and Peenya stations were part of the operations.