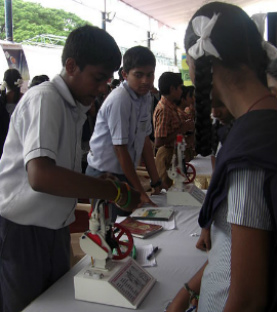 Bangalore will be hosting the Edinburgh International Science Festival, the world's biggest science festival from August 30 to September 8, at Bhartiya City.

For the first time, this will be held in India at Bhartiya City.

The crowd pullers at the show include four engaging workshops - ER (Evergreen Room) Surgery, Splat-tastic, Pongy Potions and World of Bubbles—which promise to keep people of all ages, especially children, engrossed with almost real-life situations in the science and medical world.

Over the past 25 years, the festival has been making science fun, exciting and engaging for young minds, EISF and Bhartiya City officials said.

Eight of EISF’s specially trained science communicators will travel to Bangalore to head the workshops and train the local teams ahead of the event.
According to EISF, the Bangalore event could be a starting point to create and develop more science festivals across the country over the next five years.

Simon Gage, director and CEO, EISF, said: “This festival is a bold first step in our plans to present more work in India and to bring our science festival to a nation that is currently making incredible advances in science and technology.”

Snehdeep Aggarwal, founder-chairman, Bhartiya City, said: “It (EISF’s foray into India) will engage our youth and spark their curiosity in science and technology.”