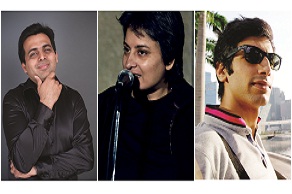 Our reviewer rates this: 3/5

“You guys are like a soundless, noiseless fart,” Vasu Primlani exclaimed in exasperation, trying to get the audience at the opening night of ‘Gill, Tandoness, and the Art of Lesbianics’, which had gathered at Movenpick Hotel on May 15, to cheer, jeer or laugh out loud. There’s a certain crowd that always turns up at comedy nights; one that Vasu was quick to point out as she took to the stage,“You know how people come to a comedy show and they’re like ‘make me’. You’ve got us wrong…we’re not going to force you to laugh….we’re not rapists; you come to us, you pay us money. We provide a service…kind of like prostitutes. With one major difference. Kidding, there is no difference.”

The giggles were all that punctuated the night. Was it a tough room? Or was it simply not the right audience? Not that the jokes weren’t funny. But getting three very Delhi-centric comedians to stand up before a very Bangalore-centric crowd didn’t have the rib-tickling impact that one expects from this comedy-hungry town.

Some themes were old - Bangalore traffic, the addition of an ‘u’ to every English word to make it sound like Kannada. Or, in the case of Vasu, an audience that did not vibe with her; a pity, since she was funny, with her acid drawl and vicious wit.

One guy seemed to have got it right. Amit Tandon. Placed between the opening act of youngster Kanan Gill, and the more experienced—one of the only three female Indian stand-up comedians—Vasu Primlani, Tandon read his audience well.

He attacked the middle class ideology and way of life; one that he and the audience identified with. He made references to his own life: his marriage; his wife’s purple shopping obsession, his childhood assumption that Taj and Oberoi were initially soap brands that his father used to bring back as gifts from business trips. And inescapably, the men-are-from-mars-and-women-from-venus references: “While women play chess, and are always 15 steps ahead, men play Ludo and are just hoping for a six!” Not only was he more relatable, he also ensured continuity in the chuckle. And one loud guffaw from a toddler in the audience. But still, not enough to have us clutching our stomachs, cramping up due to laughter.

The organisers did well to bring these comics together on one stage and anyone could sense that the comedians were proficient and had the chops. But the evening simply lacked the pizzazz. Maybe they were having a bad day, or as I said before, an uninspiring audience. My colleague in this issue’s cover story says that the home-brew Bangalorean stand-up comedians have raised the bar for other stand-up comedians performing in the city. Maybe it was that.