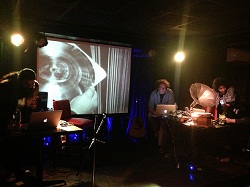 This writer grappled for quite a while to understand what it was that Alternational was attempting.

The whole thing looked and sounded interesting - music, sounds, old videos, visual effects that tended to trip the light fantastic; something one ought to appreciate for no more reason than it was art.

We understood that there was no easy-to-follow-form and there were no "songs" as such and freedom of expression hung in the atmosphere, but we could not shake the “huh?” factor. What was it?

We decided it was whatever it was that American Robert Millis (musician, collector of 78 RPM records), and Bangaloreans Arjun Chandran (sessions guitarist and sound collector), Abhijeet Tambe (former vocalist and guitarist of Lounge Piranha) and Vandana Menon (filmmaker), were putting together in the event called “Alternational”, which is curated once a month by Tambe.

Tambe, Millis and Chandran started the show with a melange of curious, though melodic “sounds” set against the backdrop of a continuous drone as if from a psychedelic tambura. Tambe played Indian classical music records on a vintage gramophone, complete with brass horn. Menon screened black and white footage including factory workers, Hindi film posters and songs, and Raj footage. She told Explocity, “I’ve collaborated with Abhijeet (Tambe) once before, when we blended dance and video. It clicked and we decided to collaborate again.”

Maybe because we were still grappling with the absence of form and sat around looking a little confused, we thought the initial pieces were too long. Karishma, who works as a content writer for an online shopping portal agreed. “Maybe they needed the pieces to be lengthy, but sitting there, I personally wanted them to move on to the next piece sooner,” she said.

Three pieces into the set, there was music. Millis took to singing the blues and Chandran played the blues guitar. Tambe sat by the black-box and console. Millis sang a blend of American folk and blues songs. Tambe detached the horn of the gramophone and provided backing vocals. Guitar, vocals and horn.
Somewhere just after Millis started his first song, Tambe played a record on the gramophone and began scratching it. This created intermittent screeching sounds that to the unprepared seemed like an error. The screeching continued through the next three songs that Millis played. After the show, Tambe explained, "The screeching was planned. I knew when and where to start and end it. Of course, you miss sometimes, but that adds to concept."

Even if we could not determine the measure of skill in this performance, or have something against which we could compare their sound, it seemed clear that the musicians were individually and collectively of a high level of competence.

Still, we asked each of them, "Were you experimenting on the fly?"
Chandran said, “No. I knew exactly what I was doing. Besides sound and sound texture have been around since our creation. There’s nothing new about that.” Millis agreed with Chandran. Tambe said, “Alternational is about trying different things. It’s about bringing art to the audience in an interesting manner. As for today’s event, it wasn’t experimental for us, but (it was) for the audience.”

There may not have been too many people at the venue, B Flat, but it seemed that everyone present was richer for the experience, for the adventure of listening to something totally outside our comfort zone.

Millis is on a Fullbright Scholarship (merit-based grants for students, scholars, teachers, professionals, scientists and artists) to study Indian music. He said, “I enjoy the Drupad vocal genre. Abhi (Tambe) and I exchanged mails and we decided to try this out.” An ardent collector of old records, Millis is headed to Mysore, where he wishes to have a look at the record collection of (Late) Jaya Chamarajendra Wodeyar.