Home | Bangalore In Pictures | ATCAG - It's Green, Healthy And Deserves To Succeed 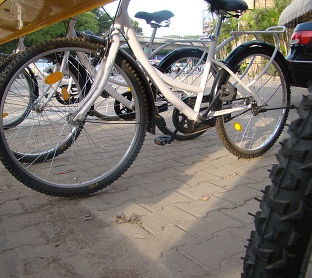 "Cyclists are the most cautious and well mannered occupants of Indian roads. A person who cycles, follows traffic rules. I see all my cyclist friends nodding in concurrence while reading this," says Srinivas Ramesh, of ATCAG smiling.

You may have seen their bicycle docks, mostly around the few Metro stations that are operational in Bangalore. You may have wondered what it was all about. ATCAG an acronym for Automated Tracking and Control of Green Assets is a service that is intended to foster a 'greener' attitude.

It's a lending library for bicycles.

You pay a refundable deposit of Rs 1000, register your name and other details and then you can pick up a bike at any of the nine docking stations in the city and pay Rs 10 per hour to rent it. You are given a rechargeable 'SmartCard' that keeps track of the usage and deducts your balance accordingly. You return to cycle to any docking station.

Very few people will consider ATCAG as anything but a good, green initiative, but judging by the low levels of usage, it appears that its time has not yet come.
Although they have been operational for almost two years—they launched in November 2011 - ATCAG records only around 15 hires a day with 350 registered users, according to Srinivas Ramesh, co-founder and COO of Kerberon Automations, the parent company of ATCAG. Srinivas Ramesh, owns ProElite Endurance Sports Pvt Ltd, a 'technical consultancy firm for human endurance activities'.

What started as a final year project of the founder, Syed Haseeb Arfath (PES School of Engineering, BE, Computer Science, class of 2010), planned initially as a parking automation project for two wheelers, has morphed into the present business model. Its mission is to be the first and only completely automated public bicycle sharing transport system in Bangalore.

Ramesh is passionate when he says that bicycles are the best known mode of transport and one of the easiest ways to get around. He added that this was the healthy way to commute. "Plugging in a transport infrastructure like ours into a growing city like Bangalore felt most apt," he explained. The company currently has 75 bicycles and hopes to add to the fleet, if the enterprise succeeds.

Ramesh is optimistic that it will. He said that Bangalore City has the largest population of working professionals commuting to work on bicycles. Athletes taking up professional cycling as a sport and participating in national and international cycling meets. He pointed out that amateur cycling groups are being set up for recreation; and promoting the concept of ‘Going Green’ is becoming increasingly popular. "It’s only a matter of time when it becomes noticeably common," he said,

According to him, civic and government bodies including the BBMP, DULT, BMRCL, DSIR and TDB have been “extremely supportive” of their efforts. He believes their patronage will provide the impetus for ACTAG to eventually take off.

Do people trash the bikes? Or steal them?

"ATCAG is a fool-proof product which is completely automated and secure. Thankfully we have not had any instances of theft or damage. Subscribers have never defaulted and have been very prompt with the return of bicycles," Ramesh said, "in fact people have respected the service being provided and appreciated it."

Is there such a thing as cycling etiquette, we asked.

"Cyclists are the most cautious and well-mannered on Indian roads. A person who cycles, follows traffic rules. I see all my cyclist friends nodding in concurrence while reading this," he says smiling. "Added infrastructure like bicycle lanes and protective gear will definitely help in making the roads safer."

Renters must bring their own helmets. ATCAG doesn’t provide any due to personal hygiene issues, but they plan to give away a helmet to every registered user, free of cost soon. They will also encourage the use of elbow and knee guards.

A regular cyclist himself, Ramesh cycles about 25 to 30 kilometres every day. Work and travel compels him to use his car, but he can’t wait till ATCAG docking stations are ubiquitous.

Ramesh would like to expand to other cities. He has a request for readers of Explocity, "Make some time and try out cycling to and from work as it might just become a passion."