Home | Culture | Clown with a Frown: A New Musical Noise 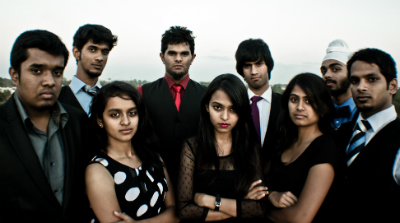 Clown with a Frown is a new band whose credo is all about energetic, colourful, and funky performances. Their influences ranges from modern alternative to old school funk with elements of rock, blues, jazz and pop.This group of twenty year olds, who besides having the traditional guitar-bass-drums-vocal also have a brass section, resulting in a sound that’s catching a lot of attention.

Bangalore is home to a number of bands that have made musical waves over the years. To name a few (that we have featured), there’s Thermal and a Quarter, Millennium, Swarathma, UNK: The Radha Thomas Ensemble, One Nite Stand, and many more. Each with their unique styles and identity.
Clown with a Frown doesn’t fall short, having established themselves as a band with their own identity and their own musical styling.

“We are a ‘brass rock band’ and our sound can be described as pop/funk/jazz fusion rock. We believe that anybody who listens to our songs, or watches us perform live, should take away something unique and special. Our performances are not just about the music, but also about the experience,” says the band.

Clown with a Frown comprises of Jonathan Reuben, 21, on guitar, Abheet Anand, 18, on bass, Reuben Jacob, 21, also on guitar, Abigail Attavar, 19, on vocals, Pramod Pratap, 20, on percussion. Together with Rahul Joshua Thomas, 19, on trombone, Rahul Richard, 19, on trumpet and Kavya Lakshminarayanan, 22, also on trumpet, you get Clown with a Frown. Michael Muller, 30, on tenor saxophone from Germany, performs with the band as a guest artist, whenever his schedule permits.

The band has won several competitions. Some of them include the Strawberry Fields 2012, Saarang 2012, an annual fest at IIT Madras, IIMB's Bangalore School of Rock competition, Bindass Restless Band Hunt Contest, Bangalore’s edition of the W.O.R.M.E Festival, Rewind’s Battle of the Bands and many more.

Their fans grew in numbers after performing at several events such as the NH7 Weekender in Bangalore, High Spirits in Pune, the Rolling Stones Rock Awards, Glorious Festival of Harmony. Clown with a Frown has also performed at the Hard Rock Rising Global Battle of the Bands, Independence Rock at Hard Rock Cafe, Bangalore, Scorenight’s at Bak Bak Bar, Bflat and Legends of Rock in Bangalore.

When and how did Clown with a Frown start?
The band was formed in August 2011 when Pratap, Jacob and Reuben met for a random jam one evening. Soon after, Anand was brought in as the bassist. The band experimented with different vocalists and sounds before finding the right fit with Attavar. Almost a year later, we had this feeling that something was missing. That was when we decided on adding the brass elements.
Through mutual friends we met with Richard, Thomas and Lakshminarayanan, and that's when they were brought on board. Very recently, we were lucky to find Muller. He understands our sound and is as excited about our music as we are.

The name of the band is quite interesting. How did that come about?
Life has its ups and downs, and sadness is as prevalent as happiness. Just as a clown brings laughter and mirth to people, we believe in dancing and singing the sadness of life away. So, we figured, Clown with a Frown was fitting.
The name was also inspired by a poem, Clowns by Miroslav Holub, that a few of the band members read back in their school days. Once the name was suggested, it just stuck because every member could connect to it.

How has Bangalore responded to this mix of a rock and with the brass elements?
The Bangalore crowd is very musically aware, having been exposed to genres ranging from metal to classical music. Playing for such a discerning crowd can be quite nerve wrecking, however it is the most rewarding feeling. Bangaloreans are all about experimenting, and love new experiences. Every show that we have played in the city has contributed to the learning curve.

Bangaloreans sure do know how to have a good time. We have never had a show where the audience has stayed glued to their seats. They are always up on their feet, grooving to our music.

To bring in this fusion of rock and a brass trio is step that we have taken. But Bangalore is a city where people will always give you a chance, and that is something that we are thankful for.

Considering that most of the band members are college students, how often does the band rehearse?
Frequency of practice varies depending on the upcoming shows and everybody's college schedules.
It is definitely difficult coordinating practices based on the schedules of 9 different people from different colleges and professions. However, band practices are rejuvenating for everyone. Even after a very long day, we all look forward to rehearsals. With a few compromises and some advance planning, we manage to meet every week to stay in the flow of things.

How much does the band charge for a gig?
We started with competitions. So, what we won was what we got. Now that we have established ourselves, we charge forty thousand and above.

Where is Clown with a Frown heading?
We have big plans for the future. At the moment we are focussing on getting our sound just right and experimenting with new things. Just as we had recently added a saxophone to the mix, we are always on the lookout for things that could make our music more exciting.