Home | Culture | "I am the singing sensei"- Suraj Mani 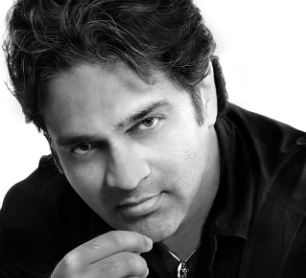 “Some musicians have music thrust upon them and I peculiarly fall into that category. You see, I got ragged in engineering college and that incident precipitated my first public performance. The repercussions have been life-changing as it opened a different side of myself, it has freed me in so many ways,” says Suraj Mani.

Comfortable with contradictions and clearly embracing his own, Suraj Mani is a singer, songwriter, composer and musician, at one end of the spectrum and at the other – an engineer and a first generation entrepreneur.

Suraj Mani sings about life the way he sees it and sometimes how he would like to see it.

Apart from being an engineer and an entrepreneur, Mani is also a singer, songwriter and composer and he tells us he wouldn’t have it any other way.
He adds, “You see, very few of us (if any at all) are completely oblivious to that little voice, which is that of life; asking us to pursue a talent or a dream. The more we listen to that voice, the louder it grows and the less we do, the fainter it is. Having said that, I don’t think it will ever die because the excitement that comes with excellence is what pushes the human spirit and hence society forward.”

The first thing on our mind was the title ‘Singing Sensei.’ How did that come about?

Mani displays a slight hint of a laugh at this question. He says, “What can I say, I tend to make sense of life as a lyricist and music as a platform for airing my opinions. I am a big fan of change and I guess my passion for ‘re-presenting’ life the way I see it or sometimes as I would wish to see it, earned me that name. May I make a comment that the term sensei doesn’t mean ‘teacher’ but rather, stands for someone who shares his experiences or in my case; sings it.”

Mani says it is the fear of criticism that often stops most people in their tracks. Having said this, he shares a couple of lines with our readers.

‘There’s a rat race that no one’s ever won
No one human
But it’s still common
What keeps you in is your fear of criticism
Balls to the monkeys, high up on trees
They never smell their own shit!’

We ask Mani about his preferred genre, which is art rock. He explains “Well, I guess that was a stage of my life when I was writing, singing and fronting Motherjane. We had very visual oriented performances in terms of image, which prompted the term.”

He continues, “Today my musical connection to art is still strong in terms of content and imagery and it is best captured in my album The Tattva Trip which is an album, a story and an illustrated coffee book.”

Before The Tattva Trip, Mani was with a band called Motherjane. We decided to ask him about his hiatus from the band, and his decision to go hit the stage again after a long break.

Mani tells us, “I was with Motherjane for about ten years, when a ruptured disc in my lower spine took me out of the music industry for sometime. I’m happy that it didn’t take the music out of me.”

He goes on to say, “I decided to record and release an album, The Tattva Trip, and did so because I needed it to make peace with what had happened in my life and where it was headed. I also started playing and composing with the guitar. Now, 24 months after having left Motherjane, I am sitting on exactly 32 new songs with more to come. Faced with an industry where recording albums is a sure-fire way to lose money, I have put together a rock collective of sorts with my new band ‘Suraj Mani & The Tattva Trippers’ (SMATTT).”

Mani is known to have a unique style when it comes to performing.

Mani lays it down for us, “I wonder who told you that (smiles). Do come to one of my gigs. They are thought provoking and the musicians may just take your breath away. We have songs that you can trip on and we promise you a good time. So if you hear of a gig, troop in and trip out.”

He continues, “I have started to reach out to people in a physical world and sing for them, because nothing compares to that connect that happens when you love your audience and they love you back.”

If one were to look at Mani’s compositions, one would agree that his lyrics are not ordinary. We ask Mani about this and his song writing philosophy.
“I tend to complete a song lyrically first and then stare at it until it starts singing to me. I then use the guitar and set the chords, groove and structure the song. That’s how it works for me and I’m sure there are many interesting variants of this process that should work equally well. One thing that is important to me is what I am saying with the song. It should reach its audience; entertain them and God willing it should enrich their lives.”

Apart from the singer/songwriter, engineer and entrepreneur, we hear Mani also wears the cloak of a life coach. So we thought it would be interesting to know more about, yet another side to the sensei.

“Now this is a question that catches me by surprise, but then again in some way it makes perfect sense to me. I love sharing my perspective and I’m a philosopher of sorts who is fortunate enough to be able to sing. How about that, I guess that explains the whole ‘Singing Sensei’ moniker.”