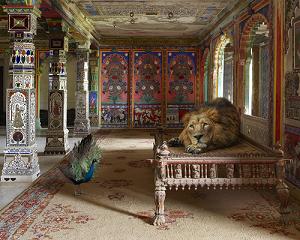 There’s much ado about India as Karen Knorr’s depiction of the country treats the sensibilities of connoisseurs in Bangalore. At the launch of her show titled India Song, at Tasveer, Rani Urmila Devi found the images “striking” and “exotic”. “They are a feast to the eyes,” she said.

Karen Knorr herself became acquainted with India in 2008, when she travelled with a friend to 16 different sites across Rajasthan, Delhi, Samode, Ramgarh, Nawalgarh, Mandawa, Phalodi, Bharatpur, Chittor, Ranakpur, Udaipur, Dungarpur, Jodhpur, Jaipur and Agra. “It was a life changing journey because I discovered a complex and syncretic culture that totally fascinated me,” says Karen, adding, “I saw that India was changing rapidly and with development, the animals were already being cleaned out from cities; buildings in Delhi knocked down or neglected. I had read William Dalrymple’s The White Mughals and more recently Nine Lives and admired what he was doing for India. I felt that perhaps somehow, I could do the same visually. My colleague and friend photographer Anna Fox had introduced my photography to Abhishek Poddar of Tasveer who was keen to work with me. He encouraged me to make work in India. I had heard many great things about Tasveer and what the gallery was doing for photography. I am inspired by India’s foundation stories the Ramayana and the Mahabharata and interested in how these are represented in muralas and miniatures in the palaces."

London-based Knorr’s works are inspired by “Indian mythology, explorative of its cultural heritage and wildlife, personifying animals in literature and art. Knorr has captured the architectural settings in a large format analog camera and the animals separately, later combining them with digital imaging”.

The result as expat Rebecca Pasquali puts it, “are beautiful photos, so evocative of the romance of India, whilst making a valid comment on modern India's cultural and social climate.”

In fact, Karen Knorr has been an important artist for Tasveer. “She's bridged the gap between the more mature photography market in the West and the emerging photography market here in India,” says Nathaniel Gaskell, curator, Tasveer, adding, “She has an established collector base (both private individuals and museums) in the West, and with her India Song series being so well received here, she is amongst the most collectable photographers in India today. No other photographer or artist has bridged this gap so well and can be said to be quite so international."

Bangalore, is certainly the breeding ground for all things international, artistic photography included.