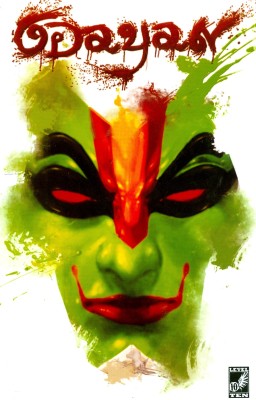 Feudal lords, traditional martial arts, a matriarchal society and a volatile vigilante in the land of the Malabar. This is Odayan.

Odayan is a graphic novel in collaboration between Level10 Comics and Pop Culture publishing. Created by Deepak Sharma and Suhas Sundar, it depicts the life and times of Malabar (or ancient Kerala). Sundar had won the best writer award in the Comic Con India awards 2012.

Odayan is a shadowy figure, who traverses against the backdrop of feudal Kerala and uses the martial art of Kalari for cutting throats and accumulating wealth by all means. His intentions and ultimate goal forms the crux of the story-line and the treatment keeps the reader intrigued.

The art work is great. You notice the attention to detail - especially the clever use of grey-tones throughout the book, blending colour only for the green face paint that Odayan dons when he is set to make an appearance. You have to laud the inventiveness of the artist Deepak Sharma. The green face paint, which is in fact used by kathakali dancers who wear it when portraying an anti-hero character (like Ravana), or the colour red used only for portraying spilt blood.

The writing in the first volume, aptly titled "Aarambham" (or the beginning), and the constructs set up show real depth. The characters are not one dimensional. In fact even the peripheral characters who meet their end at Odayan's hands have been given a back-story or have been fleshed out in a few panels of the graphic novel. Characters include the various mercenaries or avengers baying for Odayan's blood, the old ladies practicing the arcane black arts and finally the Zimorin, the rulers of the land who seem to be at the receiving end of the Odayan's ire.

The second and third pages of the book appear to be a tribute to Russian animator Genndy Tartakovsky's cartoons. This isn't a flaw in the artwork, but doesn't complement the overall completeness of the graphic novel. Odayan is a must have for comic book and graphic novel lovers and can be purchased from the Pop Culture and Level10 websites.

Lammas Bread
Would you like to submit your article to us or write for us? Click here and tell us about yourself.