Home | Culture | Review of The Kitchen by Roysten Abel 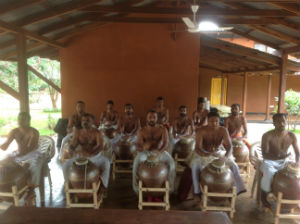 Spices and emotions in rhythm

Enter. Pitch darkness. The faint, yet distinct scent of freshly-pealed cardamom wraps you in its heady essence, as a distant drawl from an unknown rhythm drones. A spell is cast. Sink into this nether world. Lights come on. The action in The Kitchen begins...

Opening to a packed auditorium at Ranga Shankara, dramatist par excellence, Roysten Abel’s Kitchen, was administered to be a “taste to all senses” as a heads up to its opening. As the scene in The Kitchen unfurled, when man and woman took centre-stage to cook payasam, it became evident that this was no rumour. Senses of smell, hearing and sight on high alert, one wondered where the idea was born and where it was heading to. It began to take seed in Abel’s mind four years ago, when he visited Jalaudin Rumi’s tomb in Konya (Turkey). “When I walked into his kitchen, I saw a raised platform, which was the area in which Mewlana Rumi sat with his followers to meditate and pray. Below this raised area, on the right, were two large vessels, in which food was cooked for all people in the hall. On the left of the vessels, close to the entrance, were two pairs of shoes, which caught my interest. They belonged to those novices, who, when they came to join Mewlana Rumi, were asked to remain on their knees without food or water in the midst of all this action of cooking, dancing and praying for days together. If they survived the test, they would be able to join. I was fascinated that cooking was happening at various planes in Rumi’s kitchen, for guests and for the self...” writes Abel, in his note to viewers, dedicating the act to his wife Mandakini.

Scene set. Man and woman at ease with tools of their trade – larger than life ladles -- this time manifest in the heartland of Kerala, far away from Rumi’s tomb. Attitude through posture, defines their expertise in making the payasams in two large vessels befitting the kitchens of the blessed. Cardamom flavours recede to permit the fresh essence of rice and milk. Distant drawls from unknown rhythms come to light. One Mizhavu drummer, representative of the novices in Rumi’s time, is stirred in his meditation. Flavours become intense. One more drummer, gurgles in the language of his Mizhavu – one of the oldest percussion instruments integral to the performing temple arts of Kerala like Koothu, Koottiyattam and Nangiar Koothu. Man and woman continue their task of exacting ingredients for a tasteful potion to appease the Gods. Humans, the same man and woman, now start a tussle of ego. Moods heighten. One more Mizhavu drummer loses his will. It’s now time to give the payasam its body – the cooks add paal (milk) to the other ingredients. Flavours start rising. More Mizhavu drummers come to light, magically as the stage reveals a second row of artists, above the first. The plot thickens. Lights, in tandem with their moods, dip, dim and shine as the Mizhavu artists bleed with passion for this sensuous treat, seasoned with the moods of their makers, drumming up sequences of plea, to free them of their meditation. Paal thickens in the payasam, so do the drummers’ pangs for brewing the royal treat. Drummers rustle up a storm, unmindful of each other. The cooks are intense in their disagreement. The payasam is rife with ingredients, each in their turn picked to the cooks’ keen eye for winsome essences. The novices grow increasingly restless. The plot thickens. Senses awake. And a third row of Mizhavu drummers, above the second, explode. The cooks continue to squabble and cook, unmindful of the rumblings. Increasingly, the novices unite in their ineptitude to give in to their weakness for the flavours of now, near finished paal payasam. They protest, refrain, retaliate, admire and finally, even as the cooks calm down to share their potion with each other, thirteen novices, now in complete focus, seated in a large vessel, beat up a storm to invoking the heavens.

It took a while for Abel to put his ingredients for The Kitchen together – the cooks, Savita Rani and Bhardwaj, graduates from the National School of Drama. The thirteen Mizhavu drummers from Kalamandalam – Rajeev, Hari Haran, Ammannoor Ravikumar, Narayanan Nambiar, Ratheesh Bhas, Dhanraj, Vineesh, Jayaraj, Manikandan, Sajith Vijyan, Saji, Ezhikode Vineeth Namboodhiri and Subeesh.

It took the entire challenge of working with the drummers in Kerala and the actors in Delhi. “I travelled back and forth between Kerala and Delhi, doing and redoing the scores. I really didn’t know whether it would work, until we all came together weeks before the final act,” says Abel.

Exit. Partake of the paal payasam. The elixir is flavoured with the intense moods of the actors. Read between the lines of the act – ‘Food is not just nourishment for the body, but also for the soul and the act of cooking a meal is ritualistic...In Hindu Mythology, the body is often referred to a vessel for the soul. So The Kitchen becomes a metaphor where cooking is explored at various levels. Each spice evokes different emotions...’

The flavours linger on.