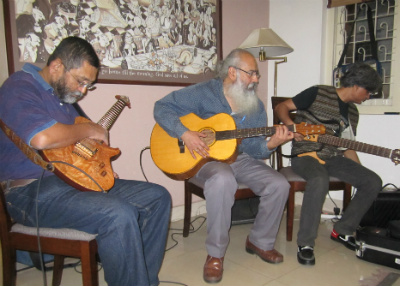 The Sarjarpur Band clears it up once and for all. They’re not a blues band at all.

Old Bangalore speaks out loud from the walls of aPaulogy. I’m a new Bangalorean by those standards. The images blend with the sounds of The Sarjapur Blues Band, one of the city’s oldest bands.

Featuring Dr Shekhar Sheshadri, professor and Head of the Department of Child Psychiatry, Nimhans, on acoustic guitar and vocals; Soumitra Mukherjee, musician and writer, on the nylon string guitar along with vocals; and Vinoo Matthew, research consultant, on the electric guitar.

I look around the room and I see that everyone knows everyone. And everyone knows the band and its music. I am the outsider. I settle down to find out what this 25 year-old band has to say to this 23 year-old writer.

The music begins and I try to understand it. It’s hard. It’s not BB King, it’s not Robert Cray, it’s Sarjarpur Blues. “The Sarjapur Blues Band is a workingman’s, underground, back-street, original, eclectic, rhythm and blues kind of band.”
I’ve heard that the band call themselves the ‘fakest blues band.’

Matthew says it’s because they play only their own music. “We have been heavily influenced by the blues but it’s not the blues that we play. We don’t play traditional standard blues.”

Sheshadri tells me, “Our music works on improvisations. We feed off each other and we depend on each other as to what we’re doing during a song.”

Matthew replies, “We don’t know jazz and we don’t do jazz. Of course, Jazz came out of blues, but the fact what we have been so heavily influenced by the blues, makes us a blues band, even if we are the fakest (chuckles).” I wonder what would constitute a genuine blues band.

Sheshadri answered, “The blues is the sound of the human heart dancing. So, if you’re playing music that’s produced from the heart, that’s the blues. Blues can’t be defined in terms of Indian blues against American blues against European blues. Today blues is very international. We do away with technicalities and theory.”

Mukherjee explains the SBB’s approach, "None of our performances are ever the same. Each song has a basic melody. Beyond that we do what we want."

Sheshadri lists a few of some iconic names that have shaped the sound of The Sarjapur Blues Band, over the past 25 years. These included vintage rock like Blind Faith, Iron Butterfly, The Who, Led Zeppelin, Pink Floyd, Robert Johnson, Willie Dixon and Jimi Hendrix.

One of the ingredients that make The Sarjapur Blues Band so unique is their choice of venue - small and intimate. They do so their performances can be personal, interactive and conversational.

They tried to achieve this at aPaulogy, one of Bangalore’s leading art galleries in Richards Town, this Friday July 12. The performance was laid out in three small rooms at aPaulogy’s gallery. With approximately fifteen people of all ages at the venue, it was intimate, it was interactive, and there was an air of closeness that filled the rooms, which spoke volumes for the band’s almost cult-like fan base. Speaking of volume, the music may have been too loud for the space.

So, what about the blues, I persist. Mukherjee patiently explains, "We've never played a 12-bar blues, ever. The word 'blues' has been used in a very, very wide connotation. It has implied different meanings at different times times. For most, it meant freedom, fighting against oppression and so on. To us, the blues is more about the freedom to express. As a blues band, we will always have an audience, but a wide acceptance, that I cannot say."

As for their performance, it was almost as if I was warned, "We’re a blues band, a fake one. Whether our music is more jazz or more blues, that’s up to you to decide," and this writer is yet to decide.