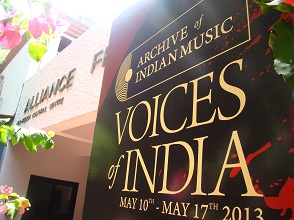 "We wanted to up the coolness factor - the oldest music with the newest gadgets."

Voices Of India is a one-of-a-kind audio exhibition of vintage recordings curated by the AIM (Archive of Indian Music) at the Alliance Francaise de Bangalore. The project attempts to combine the experience of a normal art exhibition with sound and melody.

Each person is handed a phone preloaded with the Twaang app, where AIM has uploaded all the tracks on display. As you wander around at your own pace, with the recordings playing in your head, you’ll see biographies of each artist displayed beautifully on small pillars that dot the compact space. An accompanying pamphlet gives you interesting facts for each track.

When I visitied, the room was practically deserted save for one lady who was practically drinking in the experience. Anand Ashiya, a long-time resident of Bangalore said, “This is a feast of good music. I came on Monday so that I could move around peacefully and see everything without being jostled.” But she also regretted the fact that, “It’s a little disappointing to see that not many people are taking such an interest in this public, free gift.”

Clinton Patrick, a volunteer at the exhibition feels that these recordings appeal to a niche audience. “There was a good response during the weekend, with lots of people from Mumbai and Orissa visiting the exhibition,” he observed.

Joseph Raj, technical coordinator at Alliance Francaise notes, “Despite these classical recordings not being everyone’s favourite, around 150 people showed up on the opening night. It was a rousing success even though our Honourable Guest, Gov. Bharadwaj didn’t show up.”

AIM has done a stellar job in digitising old and rare gramophone records, making them available to the public. Around 45 tracks can be heard at the exhibition ranging from Tagore’s poem ‘Proshno,’ to the orchestral masterpiece from the film, ‘Basant.’ Rare gems from the long-lost gramophone era, starting with Gauhar Jaan’s rendition of, ‘Aan Baan Jiya Mein Laagi,’ the first Indian voice ever to be recorded, to a ‘Spiritual Message of Gandhi,’ where Mahatma Gandhi reads aloud from his own writings, the first time he ever recorded.

These recordings form only a tiny sample of what the AIM have in their vaults, but some of the pieces are fascinating for anyone who is interested in India’s history and cultural heritage.

The Vishabharati Music Board’s presentation of India’s national anthem had all the stanzas that Rabindranath Tagore’s original had, not just the one stanza that makes up our present-day version.

Another patriotic piece that I found interesting was Subhas Chandra Bose’s message to Indians in East Asia. I thoroughly enjoyed Kundan Lal Saigal’s song, ‘Jag mag jag mag diya jalao,’ which made him Bollywood’s first superstar when he secured the lead in the 1943 film ‘Tansen.’

Vikram Sampath, the founder of AIM exlained that the idea of archiving these records came from a trip to Berlin, where he saw the number of archives of Indian recordings that the Europeans possessed. With funding from TV Mohandas Pai, (art, art appreciation and the preservation of history have never existed without patrons) and began importing the machines needed to convert gramophone records to digital tracks.

“The very idea that these priceless records of our culture are lying around in small bazaars prompted me to start this. Dissemination is very important for AIM. The audio exhibition is the first of its kind because people don’t really see audio as an exhibit. We wanted to up the coolness factor - the oldest music with the newest gadgets,” he smiled.

Listening to each and every one of the 40 plus clips was somewhat of a Herculean task that I couldn’t manage. The clips were recorded in mostly Hindi and Urdu, but there were many regional language recordings as well.

Basically being an English-speaker, I couldn’t understand most of the clips though I did my best to appreciate them for their cultural import.

Why Learning Indian Music Can Be Ruinous To The Health Of Your Jazz
Would you like to submit your article to us or write for us? Click here and tell us about yourself.