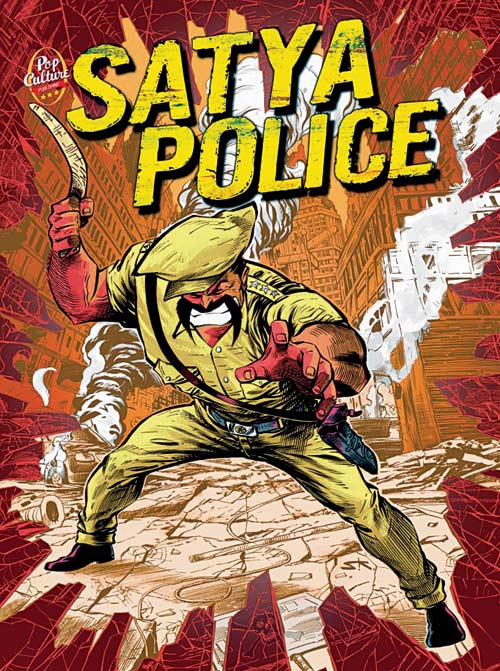 Satya Police is yet another production from Pop Culture publishing, which is fast becoming the de facto hub for Indian graphic novels. Satya Police is the winner of the Comic Con India’s grant for the best unpublished work in 2012. Created by Mohit Shrivastava and Gagandeep Kochar, Satya Police is sepia-toned tribute to Bollywood cop action movies.

Satya Police is at its core, a superhero comic. It’s about a moralistic, patriotic and rigid policeman, fighting off evil with his bare hands and a 'boomerang' (huh?). The hero is Satyavrat Bhargava, massively built, his lower mouth always full of huge gritting teeth and has a white shadow! He fights off evil-doers with some assistance from his sidekick "Stainless Subramaniam", who can emulate any shape he requires and, professor "Vaigyanically Proved".

The art-work, in this first volume is commendable as an initial effort. Sepia tones would better suit some kind of contemporary graphic novel, like American Splendor or Persepolis. It doesn’t suit a superhero comic and comes across as a forced attempt to create a bygone period of time.

The writing is fast paced and at times seems a little too rushed. Often, panels dash off into the next punch-line or a sudden segue into a flashback sequence. It’s understandable as the creators can’t wait to flaunt their work. However, a better approach would have been to let the art and writing take their time and allow the reader to absorb its nuances and detailing. Abrupt movements help in non-linear ways of storytelling, not otherwise.

Having said that, this graphic novel has lot to offer just in its initial volume. The many characters, details and attributes that the writers have created, are compelling enough to engage you for more. The evil Panchayat as the villainous organisation, the secrets that Satyavrat holds, Satya City and Not City etc., are indications of a much tighter sequel in the works.

Satya Police has glimpses of various other comics, like the red skin of Satyavrat (Red Hulk?), the general manga-ish way of drawing, as in the outlandish behaviour of shouting, instead of speaking, or constant gritting of teeth or naming a move before executing it (Satya Naash!), even Stainless Subramaniam looks straight out of One-Piece anime. That is an unfair assumption though, because if one reads a lot of comics, one is bound to make associations with other characters and comics.

Bottom line, it’s a good start for Satya Police. It will be an enjoyable read. Improved writing could turn this into a potential favourite. In fact, one cannot rule out the possibilities of a Bollywood black comedy based on Satya Police. This graphic novel is available to purchase online in almost all the stores and even on Pop Culture publishing’s site.