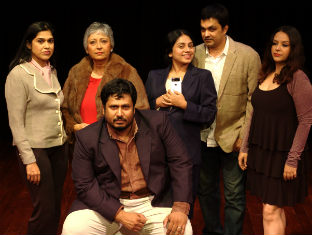 From being a 30-year-old performing company called ART, whose only worry was the next play, where to perform it and get the audience there, its metamorphosis Jagriti has now become the space to get the audience to. “Suddenly we are catapulted into running a full time business. Since we aren't business people, that's our biggest challenge,” beams Arundhati Raja, founder of Jagriti, as the theatre enters its third season of plays, starting this Friday.

What’s special this season? “This season, I was keen to bring in some shows that were dramatic and funny too,” says Arundhati, adding, “We have a great line up I think with a production from our UK partners, Soho Theatre, London and a play from Mumbai company, No Licence Yet, written and directed by Shivani Tibrewala and which stars the wonderful Tom Alter. We have Rajiv Krishnan’s tremendously successful Ms. Meena, which combines excellent comic timing with a wonderful use of props, music and cinema. Then we have our old friends from Mumbai, AKVarious who brought the highly successful The Interview to us. This time they bring Ayub Khan Din’s (of East is East fame) Rafta Rafta, a hugely warm-hearted tale of a close-knit Indian family. But we open with our own production of Sarah Ruhl's hilarious comedy Dead Man's Cell Phone, directed by Vivek Madan. I am playing a zany role in it and am loving it,” says Arundhati.

All this from the small team at Jagriti. “We are all happiest when working on our own production on the creative side, acting, directing, stage managing, designing and running lights and sound. But unfortunately, none of that is possible without the management of funds, handling the publicity for each and every play - to get those essential "bums on seats" as we say in the business,” says Arundhati.

The financial side is their constant source of worry. “In spite of that, we have taken risks. Despite losses, I think that it has helped us get to where we are in this short span of two years and nine months,” says Arundhati, adding, “Jagriti is now an accepted artistic hub. Companies from all over know of us and look forward to performing here - including a growing band of local theatre groups.

When we opened, I think that some of the local theatre companies expected that we would be another Ranga Shankara. But there was no way we could match the subsidised rentals of our sister concern. Also, my artistic vision for Jagriti was to curate good work from all over and not be a rental space alone.”

This was the vision that gave rise to the Season. “The idea was to have a bouquet of plays on offer, each to run for several days, so that there was a good choice of time to come and watch each play,” explains Arundhati, adding, “However, we soon discovered that in countries like the US and Europe, going to the theatre is a regular part of many people's lives and the concept of a Season is not new. Not so in India. Everyone knows of festivals with one play a night over a couple of weeks, but plays that run over several shows and six to seven of them over several months?! We had to really sell the idea and for the most part, people just said they'd buy individual tickets (we offer season tickets at a discounted price) because they had no idea what they were doing the coming weekend, let alone six months down the line!”

Going back to that first Season, which spanned 2011 to 2012, the Raja’s had funding and so were able to invite two international companies over - the ATC from the UK with their landmark production of The Golden Dragon and The Rogue Theatre from the US with their wonderful Shipwrecked!. “ Our own most successful production was The Dreams of Tipu Sultan. That first season set us up and I'm happy that we took the risks. The second year was ART's 30th anniversary so we revived some of our more popular plays kicking off with One Flew Over the Cuckoo's Nest. Although they were all Jagriti productions, I was able to bring in a couple of the original directors Ashish Sen for Death and the Maiden and Kirtana Kumar for Orgasmo Adulto Escapes From the Zoo. We also had Vivek Madan as the new director on The Invisible River,” reminisces Arundhati.

As Seasons change, packaging the plays to match the tastes of evolving audiences is no mean task. Notably, the effort from the team at Jagriti that will go into keeping the permutation of plays from Mumbai, London, Bangalore and Chennai running through the next few months. “I knocked my head over the packaging then I tried not to be too rigid on guidelines and somehow things just fell into place: the innovation of Sarah Ruhl's play, the previous success of Ms. Meena, the lure of Tom Alter performing on our stage, the fun of a good comedy about an Indian family and the excitement of welcoming a foreign company back to Jagriti - all made for a good season,” beams Arundhati.

Spotlight on the stage, back to the future, where they are headed is a question that the team at Jagriti are constantly asking themselves. “We never have one definite answer,” beams Arundhati, adding, “We have established some successful brands apart from the Season: Curtain Raisers, Summer Carnival. In the pipeline is a new writing workshop and festival. Our association with Bhoomija and Sunaad will continue. This has enriched our music programme. And our standup comedy shows are highly successful...”

Well, where there’s a will, there are many shows!

Jagriti’s Season 3 begins on September 6 with Dead Man’s Cell Phone, at 8 pm on all days, except Sunday’s when shows are at 3 pm and 6.30 pm. Shows are on till September 15, at Jagriti, Whitefield.