Home | Culture | The Bangalore Literary Festival: A Rainbow of Languages 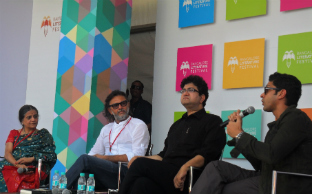 Even if the venue that wasn’t in downtown Bangalore—and in fact, was located in Electronics City, which is not known to be the most traffic free of locations—the organisers were delighted with the attendance.

Bangalore Literature Festival (BLF) organiser, Vikram Sampath, said that the footfalls were much more than he had expected. “Over the three days of the fest, we had close to 12,000 attendees.” (The event was also streamed live over online radio station, Radiowalla.)

“The number of attendees were more than last year, which just went to prove that Bangaloreans are hungry for such events, if they are curated well,” Sampath said.

Sampath believes that this is indicative of how Bangalore is a reading, thinking city that has high standards of what entertains and enriches them.

According to him, not even the distance bothered the fans. “(The distance) is all in the mind,” he gushed. “Once they got through the elevated flyover at Silk Board and saw the beauty of the venue and the facilities, food courts and coffee shops we had created, nobody left. Many came back with more friends and family the following day. We had also suggested several car pooling options and bus routes, which I'm sure people utilised.”

And fans lined up along this well-manicured venue and they were treated to sightings of celebs like Farhan Akhtar and Gulzar.

The BLF has also grown in scale. Against 65 participant authors last year, the event attracted close to 125 speakers and authors this year, the organisers claimed. “Several months of planning, hard work and toil went into drawing up the schedule for the fest,” Sampath said. “We were very clear that we wanted to enhance the breadth and scale of the festival in its second edition not only quantitatively but also in terms of quality. We believe a literature festival in India that does not feature a rainbow of our languages, is vacuous. So, our Indian language content in the programming was enhanced significantly (this year).

The event featured works in Kashmiri, Assamese, Bengali, Hindi, Urdu, Marathi, Tamil, Telugu, Sanskrit, Malayalam and several other languages.
The language of the soil got its due share. Kannada content was improved markedly as the organisers felt that a lit fest with the name “Bangalore” on it ought to feature the language of the state.

In addition, we had several oral literary languages of Karnataka that have no script, but great literary works—like Kodava, Konkani, Tulu and Beary.
This year, the festival’s guest country of focus was Germany. In association with the Goethe Institute, the BLF enjoyed the participation of several German authors.

The international line up was also curated with writers from UK, USA, France, Pakistan, Nepal, Sri Lanka, Bangladesh and so on to give the festival a global appeal.

The organisers also claim that the children’s reading hour was unique and possibly the only lit fest in India to have it. “We had exciting activities like literature quiz, contests, treasure hunts were all conceived to make this a fun-filled, enriching literary weekend for the entire family,” one organiser said.
There were the inescapable cultural performances like Dollukunita (a local folk dance), Carnatic music by violinists, Mysore Brothers, a Hindustani recital by Pt Hari Prasad Chaurasia and a rendition of mystic poetry by Shabnam Virmani and Vipul Rikhi.

But the point of a literary festival is litterateurs and the this year’s assortment was not lacking. There were lectures by city-based historian and author, Ramachandra Guha, William Dalrymple, a discussion on bestsellers by Shashi Deshpande, Shobhaa De, Ashwin Sanghi and Ian Jack. There was a spirited debate on Gujarat and Narendra Modi (with Madhu Kishwar, Hartosh Singh Bal, Sidharth Bhatia and Kingshuk Nag). A discussion on erotica, a “Bhaag Milkha Bhaag” session with Farhan Akhtar, Rakeysh Mehra and Prasoon Joshi. Local guru ‘Sri Sri’ Ravishankar, held court for a while. One highlight for a number of fans was the presence and participation of poet, Gulzar.

The organisers said they had decided to factor in requests from the previous year. “We worked on requests of particular authors to participate. Last year, the food were a disappointment for fans. Not this year,” Sampath said, and made special mention of the support of volunteers from Symbiosis Institute of Media and Communications.

As happy as the organisers were, Sampath believes that some things could have been organised better, specially in terms of the logistics. “We erred in some places and as a team we have taken cognisance of what we can better for the future,” he said. “The sound system gave us some trouble initially during one of the music concerts, which we could have avoided.”

He also felt that they had not adequately showcased Karnataka's heritage and said that would be one thing they would compensate for next year. We think it’s important to showcase our language, heritage and city to people from outside.”

How much did the shindig cost and who paid for it? Do literary festivals make money? The organisers say they did not profit from the gig. Sampath said in fact they organisers were out of pocket on the event. However, they did thank benefactors including Crowne Plaza, the government of Karnataka and some individuals.