Yasmine Reza likes to set her human drama in one scene, typically, a living room, where pretty dark themes evolve into a hysterical comedy.

Yasmina Reza’s play The God of Carnage—a Broadway sensation and also a film by Roman Polanski—works with a pretty simple premise. Two sets of parents discuss how to resolve a fight that their 11-year old sons have had on the playground earlier.

Yasmine Reza likes to set her human drama in one scene, typically, a living room, where pretty dark themes evolve into a hysterical comedy.

At Alliance Francaise, where the play was screened on November 6 and 7, 2021, another theatre patron was overheard asking, “And then what happens...” as the premise was being explained by her friend.

Life happens. As is Reza’s wont.

The play is a journey through human social emotions...laws of life...like anger, pretension, feminism, and the male primal need to physically fight. The husbands in the play agree that their sons fighting on the playground is just a primal instinct that all men have. (The husbands don’t agree on much else.)

It appears that Quiver Productions, founded by N Rishi, are more than a typical amateur theatre group. They are theatre and comedy impresarios and seem to be working these efforts into a larger professional theatre business.

In another departure from the industry norm of identifying the director of the play, the director did not want to be named. So the interview was an amorphous exercise with the players and the director bouncing questions to each other in a display of team spirit. (So we will call them, collectively, Quiver, and use the pronoun that is gaining political correctness.)

Quiver told Explocity that they chose the play for its relatability. They said It is also a fairly easy play to execute.

“We are also a cast and crew, aged around 35. Some of us are married with kids,” so the play was relatable to help navigate a marriage, family, children’s needs, that exposes “passive aggressive and two faced behaviour of people,” they said. 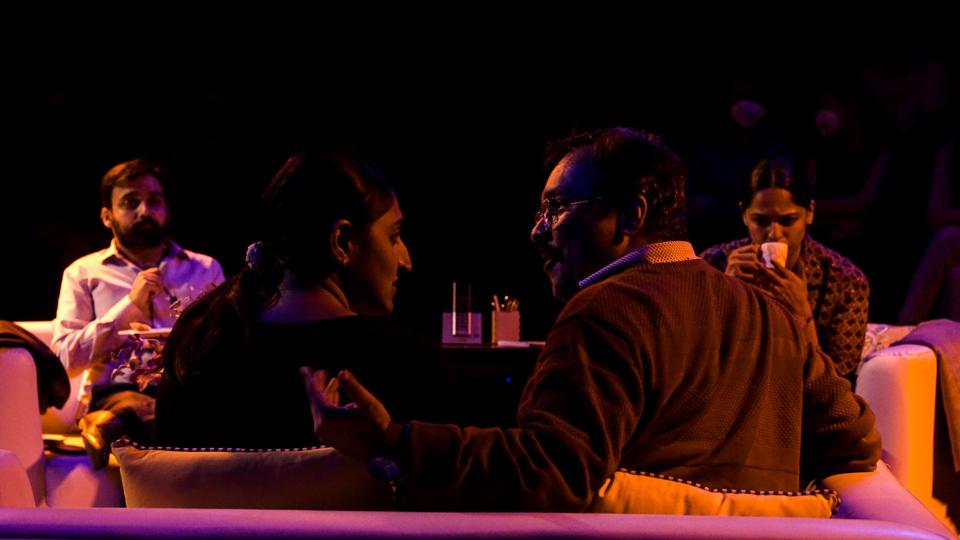 Much is being made of Bangalore audiences being starved for culture, but the play was entertaining, no matter how long ago either the players or the audience had not been face to face. The production was not without some of the shortcomings one expects—and excuses—from actors who have not faced an audience for a while, on the balance it was as enjoyable an experience as any.

We asked why it appeared that the script had been tinkered with. Quiver explained that they had remained faithful to Reza’s original but the cast did feel squeamish about some “cultural references”.

Curse words. The cast did not want to speak bad words, Quiver said.

Suneel R and Sunaina Mudaliar play the parents of one kid and Mayuresh A Nirhali and Swati Vittal, parents of the other. There was chemistry among the actors and they delivered, even on scenes that called for escalating, manic tension...even if their dramatic pauses were, at times, attention challenging.

A clock, ticking right through the entire performance, set the pace through both, tension filled pauses and the hysteric screaming.

Sunaina Mudaliar (Annette) with some shrill, played a character who changes from being a nervous, push-over, to a character who has had it up to here and rains hell on the rest of the characters. Mudaliar is also the Lead Producer of this production.

Mayuresh Nirhali (Michael) goes from a lovable character who twisted in his wife’s shadow becomes the object of everyone’s ire for abandoning his daughter's pet hamster, Nibbles. 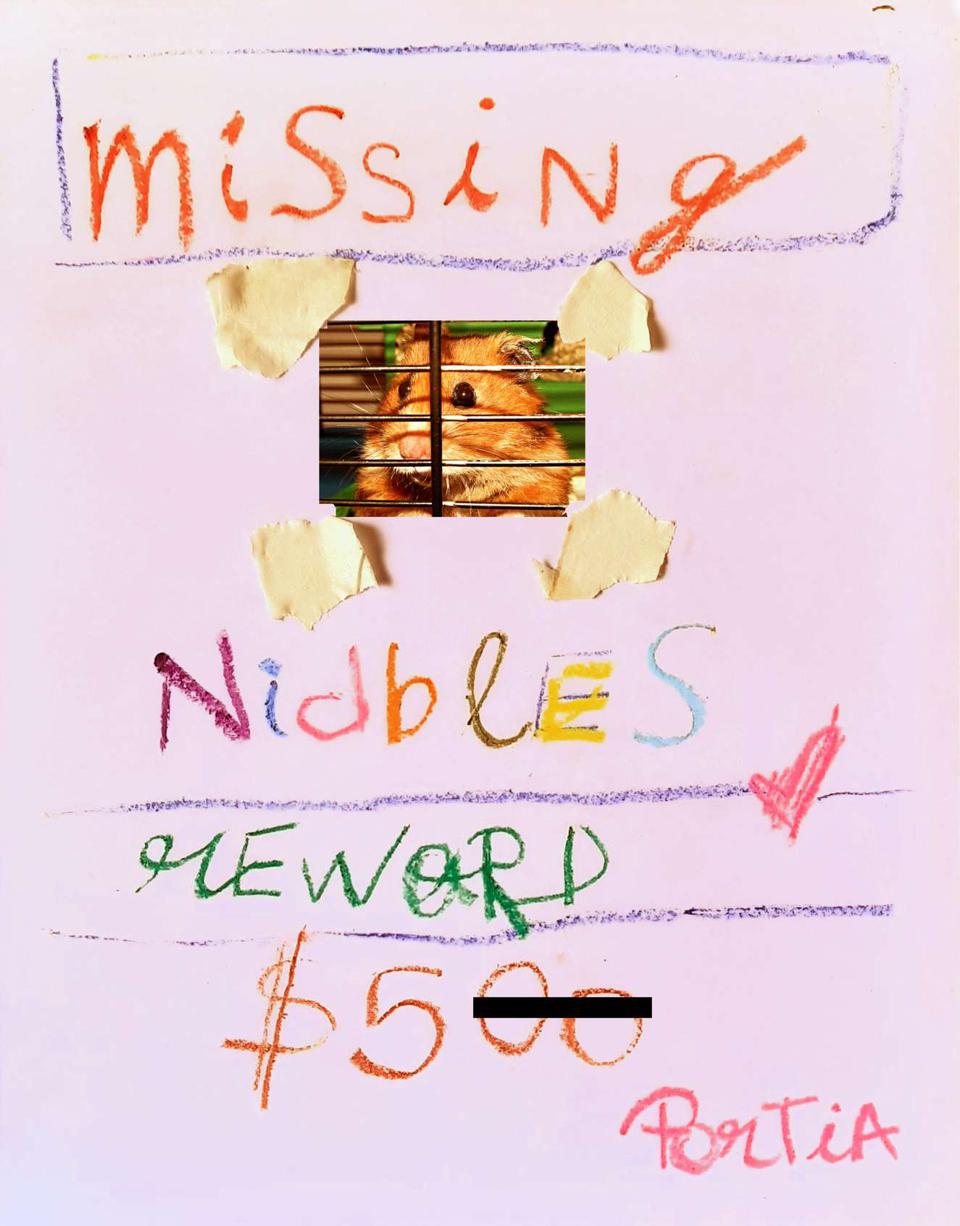 His wife was played by Swati Vittal (Veronika... or as Vittal calls herself, “Weronika”—with the Indian penchant for flipping Vs and Ws. That does pass largely unnoticed in regular conversation, but it is noticeable in a western theatre production.) Barring that, Swati Vittal was comfortable in her role and played the role with panache.

The stage was in the middle and the audience was sitting around it. That was a brave, and often engaging, touch, but several nuances of delivery and facial expression were lost on that part of the audience that had to watch the backs of the actors.

But that was not without its own drama and sometimes it felt like the stage moved with each scene as the actors changed seating positions. The resulting dizzying feeling was intentional, they said. They said they like to perform plays that have that kind of audience interaction.

The Alliance stage is intimate and the proximity of the actors and audience was palpable as the audience felt lifted from the play that started off slow and prolonged to quick and manic laughter, ending on a crescendo.

And it was certainly funny.

As one audience member said, “The hysteria was pretty hysterical.”

“We like the Alliance as it suits our set design and we think of the stage as lava, like it's hot, molten magma,” Quiver said.

God Of Carnage will be staged again on 12 and 13 November, 2021 at the Alliance Francaise.

EXPLOCITY: Any particular reason to pick God Of Carnage?

QUIVER: We like deceptively simple stories but that have depth. Like the guitar...it is simple to play but difficult to master.

Was the decision to pick this play because of Reza or Polanski?

Definitely Yasmina Reza. We read the script first and then saw the movie. Reza’s comedy is relatable for a mid-30s audience. The cast is in their mid-30s and the  “facade of a perfect relationship” is something we can all relate to.

You said the performances next week will feature a different cast. Why?

We have a dual cast. Our performances next weekend will feature a different cast. We were preparing a backup for possible Covid-related complications.

Did you need to get staging rights?

We have to pay licensing fees for each show. The fee depends on how many performances. It costs about £80 per show. The rights depend on the region. It’s not very difficult to get the rights. There aren’t too many people contesting.

AN UPDATE FROM THE THEATRE GROUP

Quiver clarified to us that our writer's comment about the cast not wanting to use curse words suggested that they had left out swear words / expletives altogether. They explained that this was not the case, as was evident from the play, but confirmed that they did soften some of the language that would be considered extreme and hard to hear—principally racially and culturally insulting or insenstive language. We agree this with view and stand corrected. — Explocity.

Leila Alvares and the Lucky Stiff
Would you like to submit your article to us or write for us? Click here and tell us about yourself.