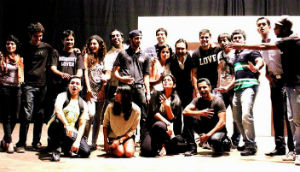 The theatre scene in Bangalore is vibrant with plays being staged almost everyday. While there are a few big names that colour the theatrical realm of Bangalore, there are also young, fun groups of theatre enthusiasts who are successfully peeling themselves away from the traditional, and bringing in a new twist to drama in the city. One such group is Underdog Entertainment.

As a theatre group, Underdog Entertainment targets audience between the age group of 18 to 40. They tell us, “Anyone above 40 may not enjoy such plays. We are radical, out there and we are a theatre group with the biggest balls.”

Chai Varad, writer and director at Underdog, explains, “When we had started off, which was in 2012, we kept it simple, that was, to entertain at any cost. We started off with no money, no experience and would often be everyone criticised for the scripts we were doing. That was when we decided to go with the name Underdog Entertainment.”

He continues, “Underdog Entertainment is all about entertainment, entertainment and entertainment. Staying true to our name, we are all about supporting the underdogs. We have launched 64 ‘theatre virgins.’ Theatre virgins are actors performing for the first time and actors who could not get the chance to act with other groups simply because they didn’t have experience.”

Varad goes on to say, “The reason we got in the game is because we were frustrated with all the plays that were coming out around the city. We felt paying to watch ‘bheja fry plays’ and adaptations was not right. There was nothing that connected to our generation between the age group of 18 to 35 and that was where we came in.”

Having been around for just a year, the group has an impressive list of eight original plays. Some of their popular productions are Love, Sex and Mocha, which is a satire on chick-flicks; Chanel and Mangalsutras, a comedy on arranged marriages, What’s up with Indian Men,  and Sex, Likes and Pokes, a comedy on Facebook and the online dating phenomenon, 12 Inches, which is also a satire on the objectification of men, and a few other plays.

Varad says he writes from the heart. “All our plays have been about what we deal with on a regular basis. From heartbreaks, Bangalore cops, hangovers, objectification of men, and such topics. We are also the first group in the country to infuse slam poetry, original music and theatre as one.”

After talking much about giving the theatre virgins a platform to perform, we wondered - How does Underdog Entertainment choose their actors?

Varad elucidates, “Finding actors has always been a problem with us cause we don’t hold auditions. However, when we choose actors the first thing we look for is ego. We tend to work with first timers, because they don’t have any extra baggage. Once, we even had a dog on stage just because we thought he had skill (Varad laughs).”

“The journey has been absolutely insane. Since we first started in 2012, we have put 48 shows across five cities. When we staged our first play, no one wanted to work with us. We had three actors. We followed our instincts and went ahead with it. After that, there was no looking back. We’ve had our ups and downs, but we stuck through it and now we are bigger than ever. We have never had resources but we have still been able to pull it off.”

Finding time for rehearsal is always a problem for us, since we all of us have full time jobs. But, we write and deliver form our hearts and the audience feels it.”
How much money do the underdogs make?

Varad tells us, “We have a philosophy if you are not entertained we give your money back, no questions asked. So, how much we charge depends on where we are performing and for whom we are performing. For example, for corporate shows we usually charge about Rs 40,000.”