Home | Culture | What’s up with Indian men: A Review 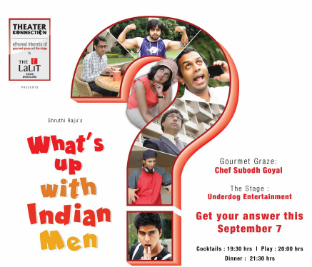 After four editions, Theater Konnection was back this year. In their continuing effort to explore the connection between food and theatre, The Lalit Ashok, together with Underdog Entertainment staged ‘What's Up With Indian Men?’ on September 7.

Prior to the event, Amit Samson, General Manager, The Lalit Ashok, said, “We believe that good food not only enhances the overall experience of the performance by virtue of its taste, it also helps build the cultural context.”
So, what’s up with Indian men, I wondered. Being one myself, writing a review for a play, whose title poses the same question, could have been a little awkward. But not with this one. It was hilarious, witty and engaging.

The play tackled a serious subject.

One can go on and on about gender issues that plague Indian society. Especially with the recent turn of unfortunate events in the news with women being targets of violence.

The play however took a pause from reality, and focussed on the lighter side of stereo types, a breath of fresh air. A cast of caricature, of types of Indian men tried to woo the female protagonist, Shweta, (played by Shruthi Raju).
From the pretentious metro sexual to the penny-saving ‘Mallu,’ the dowry mongering ‘Reddy’ boy to the shaadi.com stalker, the wannabe player to the sleazy ‘Sindhi.’

The set opened in Shweta’s living room, going back and forth from a café backdrop. One after another, the ‘Indian’ men tried to impress Shweta in their different ways, but in vain. Not even one of the seven men proved worthy enough.

The play was infused with music and slam poetry, which kept the audience glued to their seats. Each performer seemed to have grabbed the essence of the character they portrayed and pulled it off without really offending anyone’s sensibilities too much.

However, despite succeeding in terms of identifying stereotypes, the play failed to answer the question it posed in it’s title: What’s up with Indian men?
If the intention was for the audience to decide, it would be a tiresome task to pick out one definitive answer, based on the seven ‘types’ of Indian men.

The evening finished off with a delicious buffet featuring several types of cuisine.

This writer rates the play two and a half  stars.