Home | Bangalore In Pictures | Why Was Chris Gayle In A Bad Mood On Brigade Road? 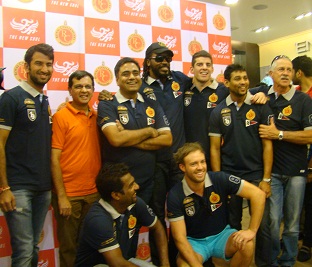 The explosive Chris Gayle, who normally fires missiles into the stands when he's playing on the field was unusually quiet during the event. We heard it may have had something to do with an after party the night before. But when asked about how he prepares for a game, he did tell us, "We go into these matches as a team and we prepare for them as a team. We have to present ourselves as one tight unit."

A few members of Bangalore's favourite cricket team, the Royal Challengers of Bangalore arrived at a popular shopping outlet, bringing Brigade Road to a complete standstill a few days ago. The crowd went wild. The traffic policemen weren't so thrilled.

Chris Gayle, AB de Villiers, Cheteshwara Pujara, Muttiah Muralitharan, Moises Henriques and Tillakaratne Dilshan along with their coaches Venkatesh Prasad and Ray Jennings were there to do a little shopping. And why not? Bangalore is a great place to shop in.

Speaking exclusively to BangaloreMag, AB de Villiers confided, "Bangalore has become like a home for me. It's a wonderful city. I've enjoyed going to places like Olive Beach and all the restaurants at UB City. And I love Hard Rock Café. Good food and good music."

Moises Henriques, one of RCB's hot, new young players, concurs: "Bangalore is like a second home for me. I've been coming here since I was seventeen. When I’m not practising I love going to play a few rounds of golf at the golf course here in Bangalore."

Muralitharan said, "What with all the events and practice sessions and games, I don’t have much time to go out. I like staying in."

When we asked veteran Muttiah Muralitharan how he got into the zone before playing, he remarked, "We psych ourselves up and make all these plans; but plans are plans. Sometimes they work and sometimes they don't. I just focus on maximising my gains and minimising our losses."

AB de Villiers observed wryly, "I don’t try and get into the zone. I watch the ball and I play the game."