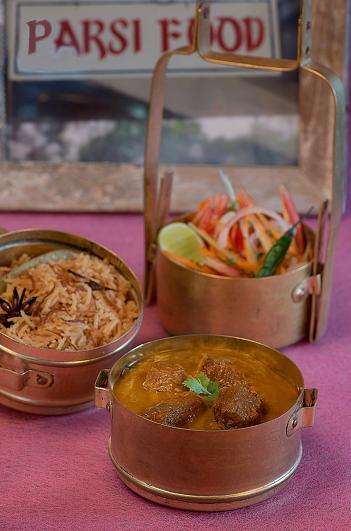 We heard a rumour that Cafe Mondegar in Bombay is closing. It might not happen, but the shock felt was proof of how well-loved Irani cafes and Parsi food is to diners. From this week SodaBottleOpenerWala sits pretty on Lavelle road so Bangaloreans can enjoy a slice of the pie, and its a scrumptious Mawa Cake in this instance.

“There were two Parsi sisters,” Chef Anahita N. Dhondy told Explocity “one of them who was a brilliant cook and one, named Aloo (a popular Parsi name incase you didn't know) specialised only in cutlets.” Hence the dish Aloo Aunty's Vegetable Cutlet. Each dish has a story to tell, as does the whole restaurant. A long board proclaims “No Flirting, No Picking Nose.” We obliged.

The menu and walls are sprinkled with anecdotes about Bombay Clubs, Parsis, and the alleged Mr Rustom SodaBottleOpenerWala himself. Rustom was asked by God, “If you had to choose one, would you pick, Parkinson's or Alzheimer's?” Rustom thought for a minute and choose Parkinson’s. When asked for a reason for his choice he said, “It’s better to spill half a glass of whiskey then forget where the bottles are kept!”

The decor is the right mix of kitsch cool and South Bombay. The menu is eccentric Parsi but also modern. We started with the appetizers. Classic Vada Pav, Kolmi Fry and Bohri Style Keema Pav were made to perfection. What we particularly enjoyed was the Spicy Mushroom on Khari and the Chicken Baida Roti. Drinks to go with it are the Parsiana, Nescafe Martini or Raspberry Soda.

The Breach Candy Awesome Okra is a dish from the Breach Candy Club in Bombay and is the only acceptable way to eat Okra at the club. Finely shredded crispy Okra on a bed of tangy sauce. The Chicken Berry Pulao is a famous dish; sour and sweet because of the berries - a must try. The Dhasak arriving in a three layer copper tiffin dabba just hit the right spots.

Finish with the Toblerone Mousse or as we did with a timeless Irani Chai.

The Khade Chammach Ki Chai is 90% sugar and its on the house if you finish it. If.
SodaBottleOpenerWala, Lavelle Road, Opposite Harley Davidson Showroom, Bangalore