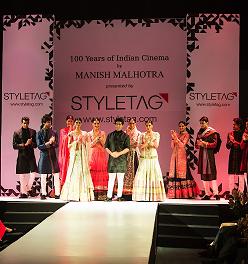 The city elite including Nandini Alva, Vinita Chaitanya, Betsy Alexander, Anju and Ajay Nanavati, Gautam Maini, Prasad Bidappa, Radha Thomas and Ramjee Chandran was seen at the event. The evening also featured a live performance by One-Nite Stand, a Bangalore-based band, which covered a variety of genres from old rock, retro, to the more popular pop with a bit of jazz. There was also a silent art auction for charity and the winning bids were announced at the end of the night.

Speaking about the event, Yashodhara and Sanjay Shroff, directors of Styletag, said, "We associated with Manish because our brand synergies are similar. He believes in exquisite and out-of-the-ordinary designs, as does Styletag.com. He has a dedicated national and international clientele, something that we aspire towards in the near future."