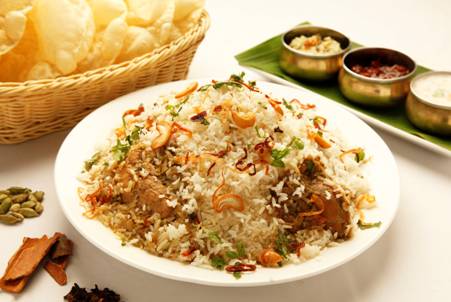 The Kerala cuisine restaurant is hosting a distinctive Moplah Food Festival. Ms. Ummi Abdulla, a pioneer in Moplah cuisine, and will feature some of the most typical dishes in the Moplah food festival like Ari Kadukka (Mussels stuffed with seasoned rice), Erachi Pathiri (thick meat flour breads), Malabar Biryani and much more. The festival displays some of the best creations of Ms. Ummi Abdullah who has to her credit 6 books, including Malabar Muslim Cookery also known as ‘The Bible of Moplah Cuisine’. “The cuisine is very distinct and focused on non veg food, even for breakfast it is mostly meat based,” she told Explocity.
Moplah cuisine is an integral part of Ramzan. Though the cuisine is similar to the local Kerala food, the special Moplah flavours distinguishes the cuisine.
Ente Keralam, Old No 12 , New No 1 Ulsoor Road, Bangalore