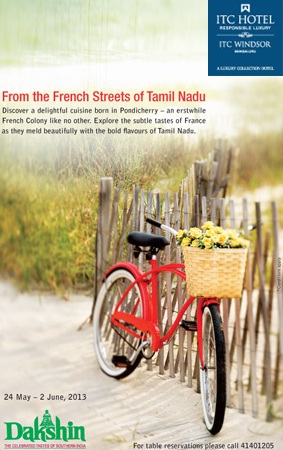 ITC Windsor celebrates a one of a kind food festival featuring Franco Pondicherry Cuisine this week.

In parts of Pondicherry, even to this day, the curious synthesis of French and Tamil (the lingua franca… quite literally ‘franca’) can be heard. Here’s an example: “Naa midi-le marche-ku poyi legumes vangittu varen.” Literally, translated this means, “I will go to the market (marche) at noon (midi) to buy vegetables (legumes).”

The former French colony comfortably carries the legacy of the colonial French culture and this sits as easily on the locals as it does on the respectable number of French people and francophones who live in Pondy and across the border in nearby Auroville in Tamil Nadu.

No confluence of cultures is complete without cuisine.

The merging of the French and Tamil cultures in the 17th century made way for a hybrid cuisine that blended the best of both the worlds. Buried in layers of time is this rich cuisine that was cooked in the households of the French speaking Tamil people.

Dakshin, at the ITC Windsor, features this unusual festival at their south Indian restaurant, Dakshin.

On till June 2nd, authentic vegetarian and non-vegetarian dishes will be served from a special a la carte menu for lunch and dinner. The menu features delicacies like Makka Cholam Vadai (deep-fried patties of corn kernels, Bengal gram and cashew nuts with ginger chutney on the side), Yera Saladu (a warm salad of tiger prawns with tender coconut and chilies), Markari Theeyal (drumstick, yam and raw mango cooked with spices, tamarind and coconut milk), Yera Malai Curry (Prawns tossed with tender coconut kernels, mint and coriander paste) and Kozhi Mundhiri Varuval (chicken morsels tossed with cashew nuts, flavoured with cinnamon).  For dessert, they serve the Coconut Baguette (a pudding of baguette, coconut milk and jaggery) and Puttarisi Halwa (a dense confection of wheat and rice).

That these dishes have a resemblance to some of the delights of Anglo-Indian cuisine, like Fish Molee or Dak Bunglow Chicken, is not surprising as they are essentially a product of the fusion of European and Indian kitchens. Restaurants like La Porte Des Indes in London have long featured dishes like Magret de Canard Pulivaar (Duck with tamarind), which is listed as Mademoiselle Lourdes Swamy’s famous recipe and Crevettes Assadh (prawns in coconut milk with all things spicy like red chillies).

Explocity’s recommendation: Do not miss.