Restaurants | Street Food From Around The World 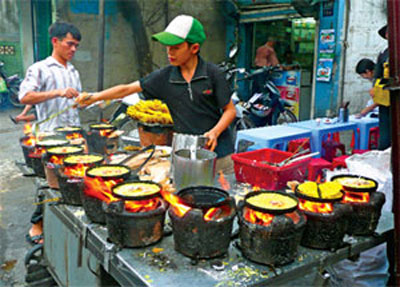 Every other weekend, Bangaloreans like to step out and grab a bite on the city streets. There are people who have a have a special connection with the 99 Dosa anna, Momo uncle and Pani Puri bhaiya of their locality.

Whether it is Chaats and Golas from the western part of the country, the Kachauris and Kebabs of the North, Dosas and Vadas of the South and Jhal Muris and Momos of the East, Indian street food is just awesome. Street food is what unites every kind of foodie - not just in India, but around the world.

American street food is something  most are familiar with. Hot Dogs, Pizzas, Pretzels, Tacos, Gyro, Tortas, Burritos, Panini and Kebabs can be found on the streets of all major American cities.

The street food in UK is a smorgasbord of spice and ingredient mix. Apart from the traditional Fish and Chips, Candy Floss, Hamburgers, Baked Potatoes and Kebabs, UK is also home to street food from India, Korea, Africa and France.

Speaking of France, though the French like eating out on the streets, their food may not necessarily be called street-food. However they have an entire gamut of quickie-food for those on the go. While crêpes and sandwiches are most common, Pizzas and Kebab sandwiches are famous too.

“Bing” is the most common street food in China. It is basically a flatbread fried in oil and stuffed with meat or eggs. Jianbing Guozi, a Chinese crêpe, finishes close second.

Sausage Sizzle, barbecue cooked sausage or steak with bread, is the most common street food in Australia followed by Pie Float which is mainly available in Adelaide and South Australia.

Japan has the well cherished Gyoza - dumplings with meat or vegetable fillings. Okonomiyaki(Japanese Pancake) is another famous Japanese street food.

Blini (Russian crêpes), Sausages and Kvass (Russian beer) are widely found on the streets of Russia.