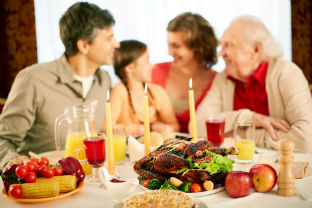 Embracing a culture and its traditions has never been a problem for us Bangaloreans. Valentine’s Day, Halloween, Oktoberfest and now Thanksgiving, give us a reason to celebrate and we’re in.

In history, many countries were known to set aside a day to give thanks for their blessings, especially those related to harvest. However, it is known and celebrated as an American tradition.

This tradition is traced back to 1621 when the pilgrims (early settlers from New England) were helped by the natives (native Americans were also known as Indians) to survive their first winter. The natives taught the pilgrims where to fish, hunt and plant crops like corn and squash. The harvest that resulted in the following year was plentiful. So the pilgrims decided to give thanks by celebrating with a feast and sharing this with the natives who helped them. Incidentally, the feast acted as a pathway to the peace treaty between the pilgrims and the natives.

It is not sure if the first feast included turkey, there were many fowl along with corn and pumpkin. Most Americans consider this as the first thanksgiving feast.

Interestingly, Thanksgiving was not a national holiday at first. A then prominent author and editor, Sarah Hale, started the campaign to make the last Thursday of November a national holiday. Many letters to governors later, she sent a letter to Abraham Lincoln, who officially proclaimed a nationwide Thanksgiving day.

Today, Thanksgiving in the US is about getting together with family and loved ones over sumptuous feast, watching American football and of course give thanks.

For the American expats in the city however, Thanksgiving is not about the turkey. As traditional as it is, they feel like its okay to forgo the bird for the feast.

“Over the years, with the many places that we have moved and the different groups of friends that we have, I think it’s okay to overlook the turkey,” says Judy Redder.

Redder is celebrating Thanksgiving over a home cooked meal. “There’s so much tradition in the food,” she says.

Redder currently lives in Kodaikanal but Bangalore is a known city to her. Were she in Bangalore at this time of the year, she says she would definitely step out for a Thanksgiving meal.

We asked her what she thought about Bangalore’s restaurants adopting the American tradition. “It’s a nice tradition and the message of giving thanks and being grateful is universal I think. So it’s nice that the restaurants are celebrating Thanksgiving,” she says.

For Clay Kelton, a photographer who has been living here for 25 years, eating out on Thanksgiving is not option. “I’ll probably cook a lot of food, call family over and throw a party,” he says. He plans to have a barbecue on his terrace with lots of chicken on the menu.

The spirit of giving thanks has taken over our city, especially the restaurants. Yes, it is an excuse to eat out. But on the upside, it also allows us to experience a foreign culture and try some turkey. Even if the Americans themselves are saying no to it.