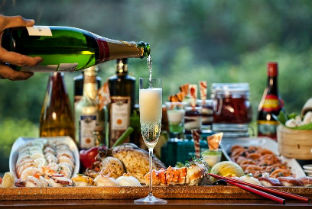 A multi-cuisine buffet is just one way to describe the famed brunch destination at The Leela Palace. After revamping themselves, the restaurant is back with a fresh approach to the popular brunch trend.

From 12:30 pm to 3:30 pm every Sunday, the brunch at Citrus in The Leela Palace offers its guests an array of delectable options.

Asian, Indian, Middle Eastern and Continental cuisines make up this buffet that looks like it needs more than three hours to do justice to. For starters, literally, there are breads, exotic Asian salads, seafood served in different styles, cheeses and Lebanese dips among other things. A pumpkin-hazelnut and tom yum are the soup options.

While the variety of mains served at the buffet is impressively vast, there’s more to be had at the live counters outside. From French toast and mini burgers to Moroccan lamb and shawarmas, there’s also fried calamari, siew mai (dumplings) and Mangalorean curries. In addition, hot out of the oven pizzas and well-rested steaks are also part of the spread.

The live counters include Indian delicacies like bheja masala and breads, Asian stir fry noodles, Japanese maki rolls and even freshly grilled corn on the cob. The bar outside, offers champagne, wines, cocktails and fruit juices.

Another element to the al fresco seating is the live band that encourages requests from guests. Don’t be fooled by the foreign vocalists because they can pull off a decent Chamak Challo and Disco Dancer, if needed.

The restaurant also has a cake shop, beside which is the live crepe counter as part of the desserts. Other than that, the dessert station includes pastries, custards, cakes and other Indian and international creations.

Only one thing remains unchanged. The service at the newly opened restaurant is still impeccable, true to its reputation.