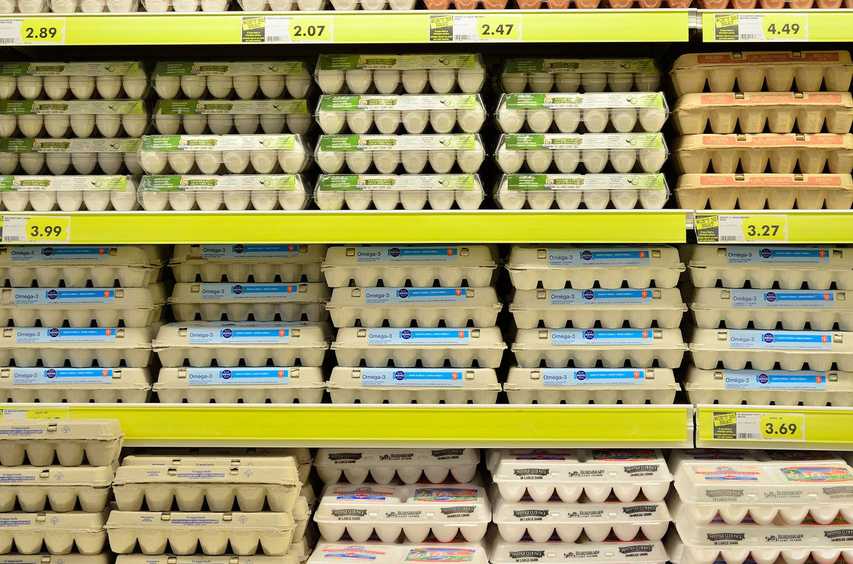 Whenever someone busts out that old cliché, "What does that have to do with the price of eggs in China?" it has always brought a related mystery to mind.

What IS the price of eggs in China?

Although I looked everywhere, it was difficult to find the answer. I could find authoritative pricing info for eggs in Belgium, but Beijing remained inscrutable.

And then even when I pecked through dozens of websites, the information I found was all over the map. Business Insider magazine said the price of a dozen eggs in China is $16.90, but another site said it was only $2.87 per dozen.

Finally-by dint of ruthless googling-I found a site whose quote on the price of eggs in India was exactly what my local Hopcoms overcharges me – Rs 48/dozen.

I confess I had to overcome my reluctance to getting my economic and statistical data from a website called "Numbeo", but they claimed—in a breathless, unpunctuated rush—that "863680 prices in 3641 cities entered by 101546 users information updated 2013-08-08". I was sold.

Numbeo matched Hopcoms. So I believed them when they said the price of eggs in China was about Yuan 11.80 (or about $1.93) a dozen.

Now, there's only so much interest we have in demystifying the price of eggs in China. So I wondered, in the converse, if a Chinese individual had googled, "What’s the price of eggs in Bangalore," what would he have found? Because of the impact of the rupee’s declining value, he would have got tangibly different answers in the space of a few months.

In US$ terms, it appears we have very cheap egg prices. According to Numbeo, here are some of the world prices for a dozen eggs (US$):

So, getting back to the economic conundrum, has the price of eggs in Bangalore fallen about 25%?

Yes, if your income is in a foreign currency, preferably the dollar. But if you’re a middle class schmo like me, earning all your money in rupees, it would make no difference. What happens in rupees (like hens laying eggs) stays in rupees and prices only fluctuate by the pushes and pulls of demand and supply.

If you continued down this road of specious price comparisons, we Bangaloreans have much cause to rejoice.

We're one of the least expensive cities in the world in which to have a fancy meal. For example, after a mood-improving T-bone steak in a five star restaurant, a pal picked his teeth and said, "There’s no way you can get a meal like this anywhere in the world for $100" (about Rs 6400 in today’s money).

Well, that's not entirely true. You can get a similar meal, with salad and a side dish, at a comparable price in a New York steakhouse like Ruth’s Chris. In many countries, a steak in restaurants of similar status would cost less.

Still, $100 is more affordable to a New Yorker than Rs 6400 is to a Bangalorean. So it would be silly for us to take pride in suggesting that we offer cheaper five star steaks than the United States does.

The Economist magazine measures it by the Big Mac Index. They take the prices of a standard Big Mac burger in different countries and index them against the $4.56 it generally costs in the US.

Apparently it works, because economists everywhere find the Big Mac Index a big turn on.

The costliest Big Mac is in Norway at $7.51. Countries like New Zealand, Australia and Britain sell them in the neighbourhood of $4.50. The second cheapest is South Africa at $1.80. And the cheapest is Bangalore – $1.50.

(Beef is not served in McDonald's in India and so they use the Chicken Maharaja Mac instead.)

This means the Big Mac is 67% cheaper here than in the US. This implies that the value of the rupee to the dollar is 67% of the (cash) exchange rate. This means the PPP rate of the rupee is $1=Rs 20. It means you can use $1=Rs 20 to get a feel of the cost of living, when you want to make price comparisons between the US and India.

For example, in the US a minimum wage earner—like someone who flips burgers at a McDonald's who is paid about $7.50 per hour—could afford the same lifestyle as someone who earns Rs 20,000 in Bangalore, which would be a white collar executive.

(In India, a McDonald's burger flipper would be paid about $0.40 per hour, according to Orley Ashenfelter, a professor at Princeton Univ.)

A small country, at the very bottom of the World Bank’s per capita GDP table, is called Tokelau. It’s in Polynesia. If they sold Big Macs, they would sell them for about $4.50. You probably could not con someone there to flip burgers for $0.40 per hour.

They might ask you to Fakaofo. But it would not be an insult – that's the name of their largest city.

In the pall of economic gloom that seems to dominate every conversation of late, we are holding out to the prospect of Bangalore being the best destination for foreign investments; if only because we sell the cheapest Big Macs in the world.

And we beat the price of eggs in China.

This article was first published on 22 Aug 2013