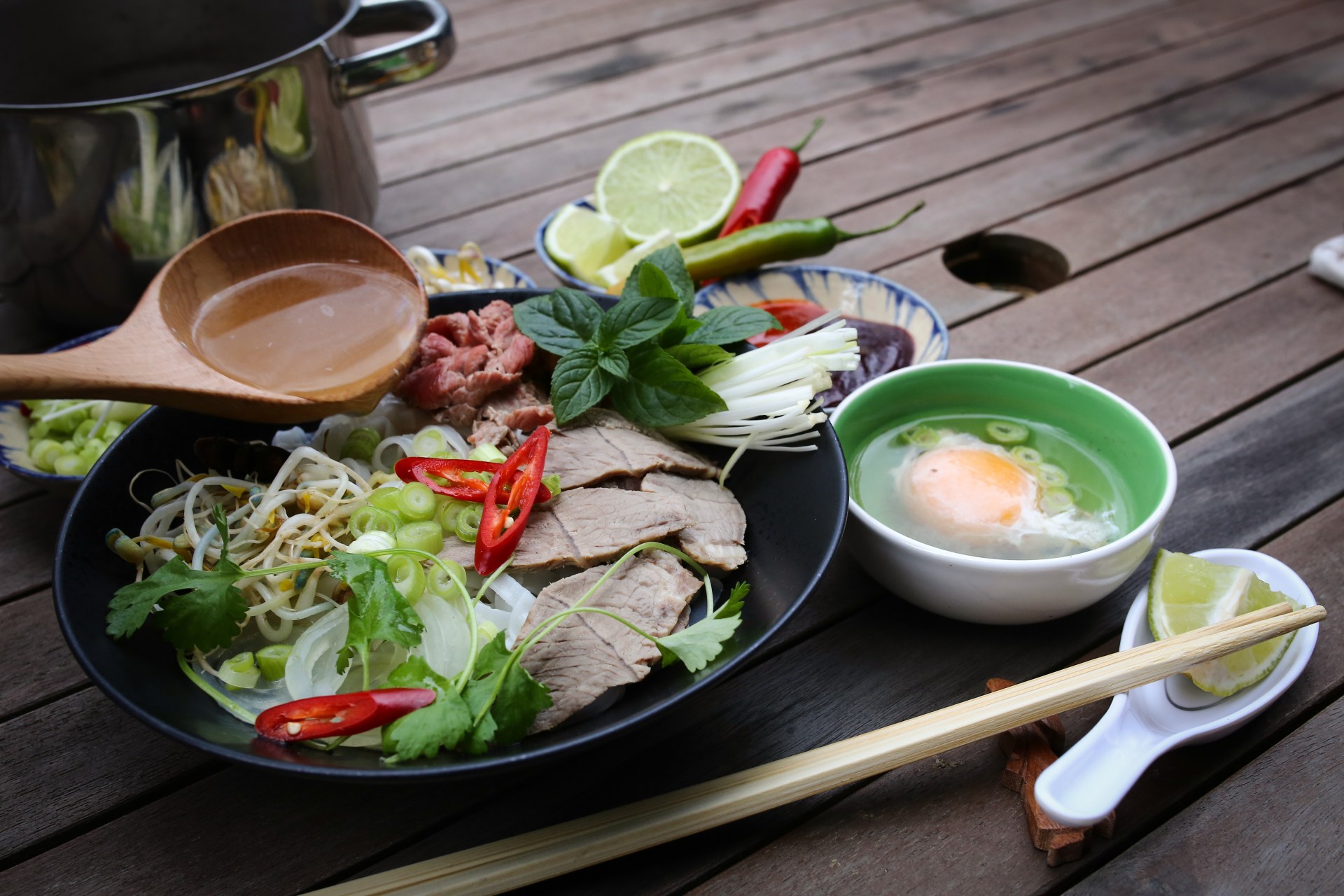 East is the Pan-Asian rooftop restaurant at the Crowne Plaza that serves Chinese, Thai, Malay, Burmese, Indonesian and Vietnamese cuisine… did we miss an ASEAN nation here?
The Vietnamese Food Festival runs till 30 September, 2016 and Chef Asmic Raj created a menu to keep with the Vietnamese culture by including fresh ingredients and herbs. Dishes include Vietnamese classics like Banh Mi and Pho. Soups, stir fries and grilled dishes are other traditional dishes on the menu.
With the balance between fresh herbs and meats and a selective use of spices to reach a fine taste, Vietnamese food is considered one of the healthiest cuisines worldwide.
As people who respect balance, Wikipedia says that Vietnamese cuisine always has the combination between fragrant, taste, and colour. Vietnamese cuisine always has five elements which are known for its balance in each of these features. Many Vietnamese dishes include five fundamental taste senses (ngũ vị): spicy (metal), sour (wood), bitter (fire), salty (water) and sweet (Earth), corresponding to five organs (ngũ tạng): gall bladder, small intestine, large intestine, stomach, and urinary bladder.
Vietnamese dishes also include five types of nutrients (ngũ chất): powder, water or liquid, mineral elements, protein and fat. Vietnamese cooks try to have five colours (ngũ sắc): white (metal), green (wood), yellow (Earth), red (fire) and black (water) in their dishes.
Dishes in Vietnam appeal to gastronomes' via the five senses (năm giác quan): food arrangement attracts eyes, sounds come from crisp ingredients, five spices are detected on the tongue, aromatic ingredients coming mainly from herbs stimulate the nose, and some meals, especially finger food, can be perceived by touching.[4]Whether complex or simple, Vietnamese dishes also offer satisfying mouthfeel during the dining enjoyment.
Yin-yang balance
The principle of yin and yang is applied in composing a meal in a way that provides a balance that is beneficial for the body. While contrasting texture and flavors are important, the principal primarily concerns the "heating" and "cooling" properties of ingredients. Certain dishes are served in their respective seasons to provide contrasts in temperature and spiciness of the food and environment. Some examples are these: Duck meat, considered "cool", is served during the hot summer with ginger fish sauce, which is "warm". Conversely, chicken, which is "warm", and pork, which is "hot", are eaten in the winter.
Seafoods ranging from "cool" to "cold" are suitable to use with ginger ("warm").
Spicy foods ("hot") are typically balanced with sourness, which is considered "cool".
Balut (hột vịt lộn), meaning "upside-down egg" ("cold"), must be combined with Vietnamese mint (rau răm) ("hot").
Salt is used as the connection between the worlds of the living and the dead. Bánh phu thê is used to remind new couples of perfection and harmony at their weddings. Food is often placed at the ancestral altar as an offering to the dead on special occasions (such as Lunar New Year). Cooking and eating play an extremely important role in Vietnamese culture. The word ăn (eat) is included in a great number of proverbs and has a large range of semantic extensions.
The festival menu is available for dinner from 7pm to 11pm.
At East, Crowne Plaza.