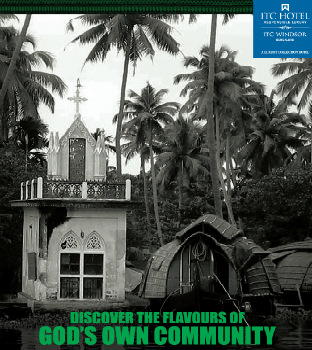 Dakshin -‘The Celebrated Tastes of Southern India’ at the ITC Windsor presents a repertoire of cuisines of the Syrian Christians of Kerala. 'Discover the Flavours of God’s Own Community' showcases the traditional delicacies from the 19th to 28th July.

Executive Chef Yogen Datta and his team will present this ancient and distinctive cuisine of the Syrian Christians of Kerala in true authentic style. Influenced by myriad world cultures like the Persians, Portuguese and the British amongst others, but with an identity that is distinctly its own.

Desserts such as palada, rice flakes cooked with milk, jaggery and coconut milk, and kalli, rice dumplings cooked with coconut milk, will also be served. Wash it down with some wine and experience the traditional cuisine from Syrian Christians.

The Syrian Christian Cuisine commences from 19 July to 28 July 2013 for lunch and dinner, a la carte, at Dakshin, ITC Windsor.