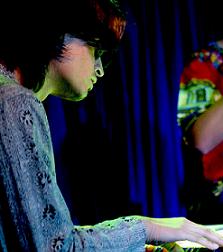 The talented Bangalore-based pianist showcases his compositions in his first effort as a bandleader.

It’s hard-to-define but it’s palpable. It's that 'feeling-in-the-air' that is oxygen to performers. Even as the first bars of Mahajan’s opening song were being laid down with professional efficiency, the audience sensed this was a hit. And the musicians took in their first deep whiff of that oxygen.

You could sense that vibe even as first tune, “Where Is It?”—featuring the intro theme to the evening’s title tune, “Refuge”—increased in intensity. It started with punchy, equitably spaced, strong heraldry-type intervals using Mahajan’s trademark fourths. And then, it filled up as sidemen Jeoraj George (drums) and Mishko M’Ba (bass) took control of the rhythm, time signatures and drive, leaving Majahan to his job of presenting his first tune as headliner of the trio.

Scroll down for the video of the opening tune.

Sunday evening, May 19th, at the Leela Galleria featured the Aman Mahajan Trio. The three high calibre musicians performed a set of Mahajan’s compositions in a set titled, “Refuge”, which is also the title of one of Mahajan’s early compositions.

The performance featured a set of eight tunes that included a few that Mahajan has performed in front of Bangalore audiences earlier with other bands, including Leifmotif, Connections and Movie Night. The set included other compositions, notably Sitaphal Mandi and Load Shedding—both of which apparently are homage to the composer’s hometown, Hyderabad—and also Ten Thousand Questions and Talking of Michelangelo.

Some of these tunes are remarkable in their sense of harmony. Leifmotif stands out in this respect. It is easily Mahajan’s showcase-of-musicality song. It appears to have been written at a time when the musician first became comfortable exploring the breadth of possibilities in the interplay of scales and modes. Some tunes appear to have been written when Mahajan was flirting with rhythmic concepts, particularly rests. Movie Night is one such example. But Refuge (with modal exploration) and Connections are the tunes that were the most mature of Mahajan’s set and lend themselves to all manners of adaptation... let’s not rule out symphonic.

These technical details—surprise tonal shifts, rhythmic passages with moving bits—apart, what came through for the audience was a set of tunes that were melodious and easy-to-follow… nod your head and tap your feet. Mahajan’s tunes are deceptively simple and most of them lend themselves to easy recall. We believe they also lend themselves to being hits.

The past year has been extremely eventful for Aman Mahajan. Recently returned from his education at Berklee in Boston, Mahajan has performed with a variety of the country’s top musicians including Radha Thomas and Sanjay Divecha. He also played in recent episodes of Coke Studio. He is an integral part of UNK: The Radha Thomas Ensemble and he was invited to collaborate with Thomas in her album, “I Only Have Eyes For You”, which is currently being featured by over 100 jazz radio stations across the USA and other countries to much acclaim. The album includes two of Mahajan’s compositions.

"Refuge" is this Bangalorean’s foray into the world of being a front-man for his own band.

The video of the opening tune: