Home | Culture | The Mahatma’s Life In A Graphic Novel 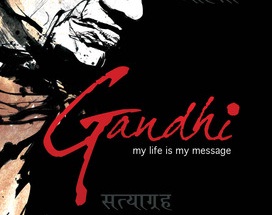 Gandhi: My life is my message, is the award winning account of Mahatma Gandhi’s life, starting from his early childhood in 1869 till his demise in 1948. The graphic novel by Campfire won the Comic Con Best Graphic Novel of the year – 2014. Biographies are seldom regarded as graphic novels. You know the basic storyline and if it happens to be the story of Mahatma Gandhi no less, you know the story, the characters and almost every aspect of his life. But, Campfire - who are involved in publishing classics, mythologies and biographies in the graphic novel format – has put together a brilliant chronological interpretation of the life of one the greatest leaders the world has known.

The book is inspired by the actual biography Mohandas - A True Story of the Man, His People and an Empire by Rajmohan Gandhi, the grandson of Mahatma Gandhi. The book tends to be a bit laborious in its narrative, but that is expected in a biography. This sets the right momentum for the events to unfold. It chronicles the tribulations and inner turmoil of Gandhi on his decisions (the Hindu/ Muslim divide), his accounts of protest in South Africa, which formed the basis for his stand for freedom and started the impetus for his fight for Indian freedom.

The research is methodical and the art work by Sachin Nagar, of Ravana fame, gives the story the fluidity to move from panel to panel depicting the story arc shifts. The artwork complements the storyline, giving grand cinematic depictions of key events in the history, like Gandhi reaching South Africa from a ship, burning of the registration act papers, the Dandi march, the final few pages, Gandhi’s assassination and Nehru addressing the nation.

The writing is by Jason Quinn, who won the Comic Con best writer award 2014, and who has now become a staple for all biographies, having already won the same award in 2012 for the biography on Steve Jobs by Campfire, which in turn won the best graphic novel award. The writing immerses the reader in to the life of Gandhi, where we get to know previously unknown facts and quirks (how Gandhi tried eating meat and then gave it up or his apparent negligence of his son) of the man.

Despite the current state of affairs and the lack of leaders in the country presently, Gandhi: My life is my message creates a sense of awe about Gandhi and other individuals who fought for India’s freedom and growth. From a personal perspective (and this could well differ from person to person), but, after finishing the novel, one admires and respects the father of the nation.

Suffice to say, this is a must read for graphic novel lovers, especially those who like biographies and more so, those who are interested in India and its history. One must laud this initiative by Campfire to present the stories of real life personas in the form of graphic novels.