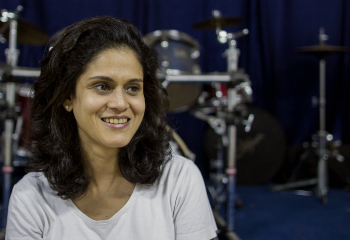 There's mystery in the air as they croon "she’s dead". "Never again," says Leila Alvares at the end of a hard night’s rehearsal. But then, she’s bound to be back the following year, as she has these past few years with her musicals – "like the proverbial bad penny," she adds.

Days before the final act, the cast and crew of Curtains are scaling pitches in tune with their steps. It emerges that Curtains has been one of the most challenging Broadway musicals Alvares has attempted. "Not only does it have a lot more dialogue than our cast is accustomed to, but the music and songs are extremely complicated, with the dances requiring a lot more technique than usual," confirms Leila.

So, with the spotlight on Shyju Varkey who is playing lead, he feels like a train coming out through the tunnel, hoping there’s isn't another waiting to run over him! “I am a part time actor, singer and not at all a dancer,” he says, adding, “I haven’t attempted this sort of a challenge before. But what I’m doing right now, is a tribute to Leila – while the core team remains the same each year, she picks the role of the person in her wisdom. So, while I’m playing lead this year, I might be doing a minuscule role in the next.”

As Lieutenant Frank Cioffi aka Varkey from Homicide Division is all set to make his grand Rajinikanth style entry, tearing a hair or two or three out of head as he nears mastery over his steps, Leila admits that she kind of already knew, who was going to play each role. “Each year, call has been through word of mouth and in the past few years through auditions publicised via social media. However, this year, for 90% of the cast of Curtains, I already kind of knew who was going to do what and relied mostly on former cast members because, as I had mentioned earlier, of the challenging nature of this particular musical. Where the crew is concerned, I prefer to stick with people who have been with me for a while as they are familiar with my style of functioning and hence things tend to get done more expeditiously,” explains Alvares.

As D-day approaches, this familiarity lacks the contempt that it is wont to. What exists is a well-knit team of people who care to dance, sing and dialogue for the sheer joy of it. Just as all other matters seize to exit post 7 pm everyday as restaurateur Prem Koshy enters his magic Broadway world and all the razzmatazz that accompanies it. “Deep down in our hearts, we all want to be Broadway performers and each of our musicals is challenge, because each note is sung and performed live. One time, I remember pushing an Enfield and kick-starting it on stage for a Elvis Presley 1960s play. Curtains is very different from anything else we’ve done so far. It’s a play within a play. To build up the suspense and hold the intrigue of the audience, the act has to be very carefully done,” he says.

As Koshy dexterously navigates his notes, we hear the inimitable “she’s dead” splicing through the monsoon air and Priya Mendens swaying, acting and emoting with intense sarcasm through her rendition: ‘Sidney, you are such a low life. I guess the reason why, is because you are built so close to the ground!’ “That’s easy, for sarcasm is almost my second nature,” laughs Mendens, adding, “I have done many musicals, but this one is challenging. Its tension time, but I have a good feeling about it!”

Prem shares this sentiment, and adds: “Also, as I get older, all the dance moves are getting a little more challenging.” But then, he’s keeping up with it, as is Darius Taraporvala aka Tuffy, not only in step, but also in spirit. For, Tuffy, is briskly about, getting his costumes in place, making it to rehearsals on the dot, mastering every note and move for the final act.

Stage set, Leila is happy that Curtains is here. “This musical was suggested to me by the distributor in New York whom I normally buy the rights from since he knew my penchant for musical comedies with catchy tunes. In fact, it has been waiting to happen for the past three years, but was always upstaged by more recognizable musicals. But now I'm glad to say it's time has finally come!” she says.

While the butterflies have set in for the cast of Curtains, cosmopolitan audiences are ready for their next Broadway in town. “Bangaloreans have definitely begun to appreciate musicals a lot more in recent times than when we first began 16 years ago. Likewise, the other smaller cities like Mangalore and Coorg. Goa, Chennai and Mumbai obviously have always been exposed to them and so we have been enthusiastically received there as well,” says Alvares, adding, “Thanks to the more cosmopolitan crowd now evident here, I think musicals are here to stay and only get better.”

In aid of local charities