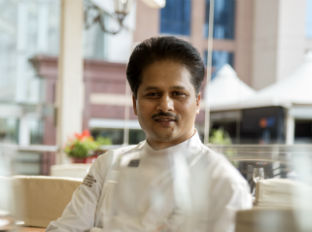 Abhijit Saha is the founder, director and chef of Avant Garde Hospitality, which owns and operates two critically acclaimed premium restaurants in Bangalore. A few weeks ago he won the title, Chef of the Year 2013 at the prestigious Indian Restaurant Congress & Awards, Surajkund, Delhi NCR.

At just 43, Saha is one of the youngest to feature in the list of fifty of the most important people in the food and beverage business in India.

After winning the Chef of the Year award, Saha said, “I would like to take this opportunity to thank Franchise India and the members of the jury for awarding me the title of 'Best Chef of the year, 2013'. I am humbled and excited to receive this award and more so in Surajkund. It was during the first Surajkund Crafts Mela, 22 years ago that I made my first foray into the public arena as a student chef in-charge of the regional Indian cuisine stall put up by National Council of Hotel Management. With this award in Surajkund my life as a Chef seems to have come a full circle.”

When asked how he has grown to be such a powerhouse brand in the industry, he says, “My work speaks for itself. I have never made a conscious effort to market myself; rather I have tried to do my work with integrity and passion. My thirst for knowledge and willingness to experiment with new ideas is what has driven me forward.”

His keen interest in wines has taken him all over the world, including France, Italy, Spain, California and Australia. He is currently President of The Bangalore Wine Club, and is a founding member of The Wine Society of India.
His restaurant Caperberry, has won the Best Stand-Alone Restaurant in India, awarded by a major publication in November 2011. His popular second outlet, Fava, is a chic Mediterranean restaurant, located at the uber-luxe arcade in UB City.

When and how did cooking start as a profession?

I started in 1990 when I joined the Taj Group of Hotels in Delhi as a Kitchen Management Trainee. The interest sparked off when I scored the highest marks in Food Production in my first year exams at the Institute of Hotel Management, Pusa, New Delhi.

How has the culinary journey been for you?

The journey has been an exhilarating one with no dull moments. There are several events and instances that are special including being a Chef at DAVOS - World Economic Forum in 1994, winning a Gold Medal at the National Mango Cooking Challenge in 1998, being associated as a Chef with heads of state and celebrities like Margaret Thatcher, George Bush, Cindy Crawford and more.
It’s really been s special. I have many, in fact, too many memories.

Other moments that come to mind would be winning the Foundation for the future scholarship from International Hotel and Restaurant Association, 2004, opening my two restaurants Caperberry and Fava as a chef entrepreneur.
However, the most cherished and fondest memories have always been, and continues to be, the love and adulation I have received from my restaurant guests, friends, colleagues and peers.

What does winning Best Chef in India mean to you. What edge did you have over the other chefs?

Firstly, it is a humbling and gratifying experience. I’m not sure about the edge I had over the other chefs, but, the traits that may have contributed towards this include innovation, attention to detail, understanding of quality and sheer hard work for over 22 years.

What do you think of the dynamics of the food culture in Bangalore?

Bangalore, as a food and beverage market, has evolved dramatically in the last five years or so. Besides interesting restaurant concepts in the star hotels, we have seen a lot of activity particularly in the stand-alone arena ranging from fine dining restaurants like Caperberry and Fava, regional cuisine restaurants, new international cuisine restaurants, micro breweries and plush lounge bars. I believe Bangalore is gradually evolving into a world food destination.

Can you tell us about your worst memories in the kitchen?

There was this one time when there was a delay in food service by over an hour to a group of VVIP guests due to a sudden power disruption in the kitchen is something I would definitely like to forget.

What advise would you give to an aspiring chef?

Be focused and stay committed to the craft. Learning is a long journey and there are no shortcuts to it.

If one were to criticize your food (say, Gordon Ramsay), how would you react?
Everyone has a right to his or her own opinion, whether it’s about my cooking or not. I take criticism as feedback and try and see how I can improve on areas that requires so.

Do you have any plans in expanding your culinary empire?

I wouldn’t say I have a culinary empire. I am happy with my two restaurants, Caperberry and Fava, in Bangalore at the moment. However I am hoping to add a few more in the near future.