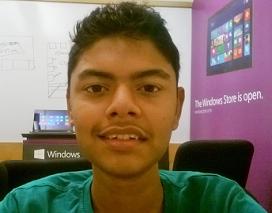 Pratik Mohapatra learnt the basics of programming at school and went on to learn advanced coding on his own. He created an App called Calculator+ with a paid version called Calculator Hub for Windows Smartphones. Explocity speaks to the 15-year old who someday aspires to create a computer operating system that will rival Windows.

Pratik Mohapatra comes across as any other 15-year old. He studies in class ten, likes computers and enjoys cricket. What sets Mohapatra apart from his peers is the fact that he has a fully functional app on the Windows Marketplace (Windows Mobile App store). What is also outstanding is that most of his C# programming skills are self-taught.

Mohapatra’s App is called Calculator+ and is presently available in two versions – free and paid (Calculator Hub, Rs 55). Calculator+ is an evolved version of any other calculator app you can get today. It has six functions. It calculates Simple Interest, Compound Interest, Age, contains a scientific calculator and also has a Body Mass Index calculator coded in.

Why did you think of making this App?
It all started when my father was using the regular built-in calculator available on his Android Smartphone. He found it to be cumbersome, as it didn’t do everything that he required. That got me thinking. People usually download six different calculators for different types of calculations. My father egged me to try and create an App that could solve this problem. That is how Calculator+ and Hub came about.

How many downloads have Calculator+ and Hub registered this far?
The free version has been downloaded on more than 500 Windows devices. The paid version (priced at Rs 55) has been downloaded on 5 devices. The App is presently available only for Windows 8. I am working on creating a version of Windows 7.5 as well and I am sure that will increase the number of downloads.

Your loyalties seem to lie with Windows users. What about iOs and Android?
I will definitely be making iOS and Android versions of the App. I am just getting my arms around iOs and Android programming. I’m a little short of time due to my studies.

Any particular individual that you are inspired by?
I think “inspired by” is a little too strong, but I do look up to Bill Gates. I think what he has done and achieved is fantastic.

How supportive has your family been?
My parents and my sister have been very supportive. They gave me my time and space and didn’t impose deadlines on me, because they felt that I was working on something useful.

How helpful has your school been?
My school (National Public School, Koramangala) is where I learnt the ropes of Visual Basic. That gave me an overall understanding of programming. Most of my coding has been self-taught, but I have to thank my teachers Rita ma’am, Vinodhini ma’am, Chandritha ma’am, Suhasini ma'am and Rashmi ma’am.

How do your classmates and friends react to the fact that you've created an App and are written about?
Their initial reaction was of shock. But they appreciate it.

What next?
I plan to make more apps for diverse platforms. I am planning to do my engineering, probably from BITS, Pilani. I have many ideas and have also started working on my next idea. I also feel that this far, there is no other operating system that can even compare to Windows. I want to make an operating system that will rival Windows.

Calculator+ can be downloaded on the Windows Marketplace: http://www.windowsphone.com/en-in/store/app/calculator/55484b57-98fb-4ddf-9046-40eaea5d8acd