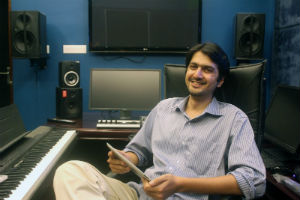 Ricky Kej is a musician, composer and record producer. He has released a number of albums throughout his career, including seven on the Virgin EMI record label. He has received a nomination for Best New Age Song in the Hollywood Music category in the Media Awards (HMMA). Explocity talks to Kej about his Bangalore beginnings, his evolution as a musician and his nomination.

Ricky Kej was born in North Carolina before moving to India at a young age, where he grew up and was educated. He completed his schooling at Bishop Cotton's Boy's High School, Bangalore.

He narrates, “When I was in school, I was inspired by a Pakistani band called Junoon. They were a rock band, infused with the tabla and a Sufi vocalist. They were extremely popular from 1996 to 2006. Taking from their music, I too, wanted to go against the stereotype, or rather, against ‘typical’ music. So my music is essentially fusion music.”

In the year 2005, he graduated as a dental surgeon. He tells us, “Ironically, I never practised dentistry a single day of my life. Although, I would make sure I studied so I wouldn’t have to repeat a semester. I would hit the recording studios, after classes, from 5 pm till 2 am.”

Kej produced jingles for television and radio channels through college and beyond. According to him, over a span of 13 years, he has produced over 3000 jingles. His expertise in this field allowed him to work with a variety of companies like Essilor, Microsoft, Levis, Air India, and Blaupunkt.

After his jingle success, Kej released his first international lounge album titled Communicative Art - Lounge From The Bay, in 2003. Songs in the album were released over 20 international compilations, including France, Poland, China, Taiwan, India, Israel and Germany.

Early in his career, Ricky Kej released three albums before licensing his albums to Virgin EMI. In 2011, he composed the music to the opening ceremony song for the Cricket World Cup.

After his third album, he went on to win a number of awards. The success of his first three albums allowed him to get involved in film soundtracks. His first break in this field came in 2008 composing the entire score and songs for Kannada films, including Accident (2008) and Venkata in Sankata (2010).

“As a musician and an artist, passion is key. It’s an absolute must, that it stays alive,” he explains. When Kej entered the music scene fulltime, with jingles and film scores, that became his day job. But he would work on his own music into the wee hours of the night.

He makes it clear, “It’s such a cliché to say this, but my music does not have a genre. Gone are the days of what is commonly understood as ‘typical’ music. But if I had to, I would label my music as down-tempo electronica fused with Indian classical music.”

He establishes, “At the end of the day, I am an Indian.”

Fusion music is often spoken of, especially in the context of fusing Indian music with western genres. Kej reaffirms, “What I’m doing has been done before. But the point of it is to pushing the limit, to make it fresh.”
“Music, as an art form has its definite boundaries. But, when fusing different elements, there’s no end to what one can do.”

Kej continued to work for the Kannada film industry for about four years. “There was no particular reason for me to have left the industry. In fact, I enjoyed myself to quite an extent. However, it wasn’t a place where I could express myself. A musician is given a specific brief. He or she then has to produce music in terms of giving the hero or the villain a voice.” He continues, “Most musicians in India are forced to make a living that way. When there is a song that is topping the Indian popular charts, the first direction is often, ‘I want a song like that’. This becomes very dangerous. Musicians are pushed into an area where they no longer enjoy their own music.”

By 2012, Kej’s music video for Arabian Sea had frequent airplay on VH1, which won him the VH1 award in for India Rules - Artist. In the same year, Ricky Kej composed the anthem Jaya Hain Kannada Thaye, as a tribute to the state of Karnataka.

In 2013, Ricky released his first independent album in America from his own Raveolution Studios, including Shanti Orchestra, Ballad of Maya and Kamasutra Lounge-The Deluxe Edition.

Kej talks about his current album and his future plans. He tells us “My recent album is called Shanti Orchestra, which charted at number 5 on ReverbNation in America. About 450 radio stations are playing it.”

He continues, “I am currently working on a follow-up album. It will feature 20 musicians from around the world, including South African, German, the Middle East, Germany, and Paul Living Stone from Los Angeles, who was a student of Pandit Ravi Shankar.”

Kej’s list of awards seems unending. Now, he has a chance of adding another feather to his cap. It was recently announced that Kej is a nominee for the sixth Hollywood Music in Media Awards (HMMA), for Best New Age Song, which well be held this November. The nominated track Forever is from his 2013 release Shanti Orchestra.

“Considering that my music has strong Indian influences, it is ironic that it is more appreciated in America, than in India.”

“It’s a huge deal. As a musician, selling records is crucial. It’s always good to hear that your music is selling. But, when you’re nominated for an award which is second to the Grammys, it becomes a stature.”

Kej tells us that there is a panel that chooses the winners.

“Being appreciated by not only your peers, but by the top musicians in the world is an honour. I think I stand a good chance to win. In fact, I might win it (chuckles).”

Kej mentions that he is looking forward to 2014. He plans to focus on writing scores for films. He says, “One must know the difference between writing a score and composing a song. Scoring is a matter of interpretation.”

He was present at the Cannes Film Festival and has been discussing scoring for several international films. “I have to mention though. I really want to work with Girish Kasaravalli. The main reason for this is, he does not compromise with his work. He had a vision and he follows it. For me, as a musician, I follow the same principle.”